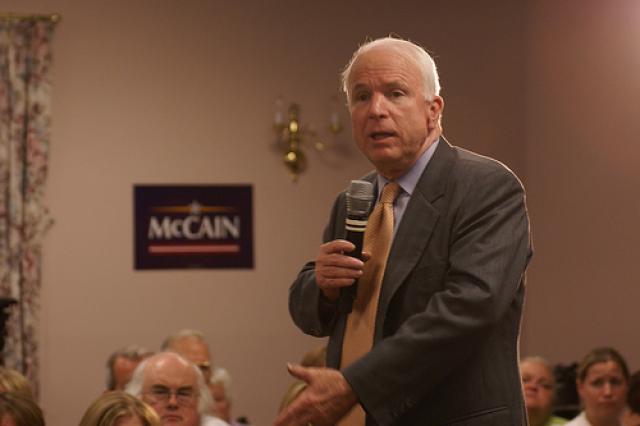 In over the past decade, U.S. Republican presidential hopeful Senator John McCain of Arizona has annoyed, aggravated, angered, and nearly destroyed some of the most powerful members in the Republican establishment of Washington. As a result, John McCain has made a list of antagonists.

Two notable antagonists are Grover Norquist, who embarked on an anti-tax crusade, and the Gun Owners of America. McCain’s old adversaries have mobilized to keep him out of the White House since his New Hampshire primary victory put him back on track towards the GOP’s presidential nomination.

“It is conceivable that he can be nominated because of the [primary] system we developed,” according to David Keene, who is the chairman of the American Conservative Union. Keene who is a longtime foe of McCain added: “It’s not conceivable that he could come out of this nomination fight or the national convention with the kind of enthusiastic support he is going to need for the general election.”

McCain’s advocates have said that official Republican Washington group has been dominated by President George W. Bush’s “Death Star.” Bush’s Death Star is an array of both advocacy groups and lobbyists that supported Bush in 2000 and remained the power brokers of the city according to McCain’s supporters.

In last year’s appearance on David Letterman, McCain snubbed Keene. In a nationally televised debate that took place in November, he dismissed Norquist’s pledge on taxes.

“He almost seems to delight in going out of his way to stick his fingers in folks’ eyes,” according to Larry Pratt, the executive director of Gun Owners of America.

According to John Weaver, a longtime adviser to McCain, his opponents had lost their power and influence long ago and do not realize it.

“Here’s who John McCain has angered: self-described conservative lobbyists who basically represent special interests,” he had said. He adds: “They’re angry at him because he has put the national interest in front of their special interests.”

The Republican establishment seems to be split due to John McCain.

McCain had made enemies in the gun rights community when he worked on the behalf of mandating background checks on gun buyers at gun shows in Senate legislation along in referendums in Oregon and Colorado.

Some business groups were angered due to McCain’s advocacy of legislation to fight climate change. These groups argue that there is no global warming.

He had recently supported legislation that would grant illegal immigrants a pathway to citizenship. McCain had won enmity from the staunchest conservatives as a result.

However, Scott Reed a Republican strategist not aligned in the 2008 race said he advised McCain not to waste time with those people.

"No doubt some of the old archenemies are waiting in the weeds in South Carolina,” he said. Reed adds: “But Republicans understand this election has some big stakes involved, and beating either Hillary or Obama is not going to be easy. The Republicans need someone with experience and judgment, and that’s McCain’s trump card.”