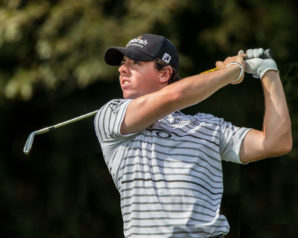 Rory McIlroy spoke to the Irish Independent in an interview that covered a plethora of topics, but the second seeded golfer’s biggest comments included the great Tiger Woods. McIlroy said, “I’m probably one of the biggest Tiger fans you’ll ever come across.”

McIlroy, an avid fan of Woods, states he wouldn’t trade places with Woods.

The golfer reflects on a time in Florida when he asked Woods to dinner. Woods declined, stating that he couldn’t.

“I could not live like that,” states McIlroy. He suggests he would rather win fewer tournaments and majors than Tiger instead of living a high-profile life.

He mentions Tiger’s insomnia, which he believes is a product of the golfer’s workout schedule. McIlroy and Woods are friends, states the golfer.

“He reads stuff and educates himself on everything,” states McIlroy on Woods.

He recalled a text message from Woods at four in the morning that read: “Up lifting. What are you doing?”

Tiger’s competitiveness doesn’t tarnish his respect for McIlroy. The two discussed the ’14 Masters where Woods stated, “I’m not going to let you win that slam.” McIlroy rebutted, “You’ve never had to face someone like me.”

Jay Monahan, PGA Tour commissioner, is confident the 41-year-old Woods can win the PGA tour again. At Saturday’s SBS Tournament of Champions, the commissioner said, “Just so we’re clear, when he’s 75 years old, I’m going to think he can win on the tour.”

Multiple back surgeries kept Tiger out of competition for 15 months. The golfer plans to ramp up his schedule in 2017, with his first competition at the Farmers Insurance Open on January 26 – 29.

Tiger has stated his ambition to play a full schedule.

The golfer last won a PGA Tour event in August 2013.

Rory McIlroy is the number two ranked golfer in the world behind Jason Day. The golfer was in the news late last week when he stated that he could mix-match clubs in 2017. He was in Dubai in December to test new clubs from manufacturers across the world.

Forbes reports that the folder will use Callaway woods and irons in his first competition of 2017. He doesn’t have an endorsement deal with the company as of writing this article.

The golfer doesn’t intend to sign an equipment deal in 2017. He formerly used Nike equipment as a brand endorser, but the company announced in August that it’s exiting the golf equipment business.