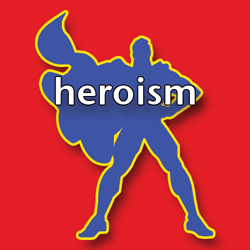 What if you could pick your own heroic quality? Would you choose the courage to save lives, or a special skill that might find the lost, achieve justice, or stop a war?

Maybe these days it’s good enough to just be good looking, or have a camera stuck in your face all day. Is our idea of heroism becoming so watered-down that we can’t tell anymore who’s really deserving of the honor of being called heroic?

School children are often asked to write essays about their heroes – and most often the people about whom they write are parents, grandparents, and friends who have had a positive influence on them.

So, who are your heroes?  More importantly, what’s the basis upon which you choose them?

The dictionary defines a hero as a person who is admired for great or brave acts or fine qualities.  It goes on to say that a hero is admired for his achievements and noble qualities and is one who shows great courage.  So, with this definition in mind, can someone please tell me why actors and sports figures are now deemed heroes?

Heroes come in all sizes and shapes.  A hero can be the firefighter who runs into a building to save a child, the person who plunges into the ocean to help a drowning swimmer, the soldier who protects our American way of life. These are people who step into the danger, at great risk to themselves, to ensure the safety and well-being of others with actions that are bold and clearly noticeable.  And then there are the quiet heroes among us:  the educator who puts in extra time with students after school just to help them; the parent who selflessly goes to work each day to provide for their family; the person who helps the homeless or ferries abused women and children to safety.

Heroes are also those who do as their conscience dictates regardless of how that might endanger them. In signing the Declaration of Independence, our founding fathers opened themselves up to charges of treason and the loss of everything they and their families owned. Had we lost the Revolutionary War, there is no doubt these men would have been executed for disloyalty to the Crown. But they did what they thought was right, and the result was a new nation.

What do heroes have in common? They give of themselves to help ensure that others are taken care of, and they do so selflessly, without seeking fame or compensation.

As our use of language has become looser, so has the use of the word hero.  Bat enough home runs, and you are a hero. Make a great movie, you are a hero. Pop stars, actors, and sports figures have all been ascribed hero status when in reality they are simply talented people plying their trades.

So why do we place so much value on the lives of media darlings and pay so little attention to the real heroes in our communities?  How do we currently define heroism in the United States, and why it might be important for us to stop and recognize what true heroism is.

We have always needed heroes in our lives, people we can look up to for their courage, for their selflessness, for the ways in which they inspire and bring out the best in us, for the example they set.  In our uncertain world, understanding what makes heroes is more important now than ever.

So, where did the heroic idea begin?

We know the Greek heroes from mythology from books, television shows, and movies. The adventures of Hercules, Perseus and so many others, male and female, captivate and reveal to us the good and bad aspects of human nature. Their stories are so compelling that they are replayed, even reinvented in our media. Katniss Evergreen from the Hunger Games looks like the reincarnation of the Greek goddess Artemis as she wields a bow and arrow. You could say the goddess Athena resides within her too, for Katniss’s wisdom and her dedication to saving cities and populations.

Ancient Greek heroes have made impact also on our comic books, action figures, and movies as well. The Avengers of Ultron gave us Iron Man, Thor, the Hulk, the Black Widow, and so many others who, despite their human frailties, each have a power that allows them to be heroic. Stan Lee, the super-hero master, knew what he was doing. The Greek heroes were often the offspring of a god and a mortal. They therefore had a special power to assist them in defeating enemies. For example, Hercules, with his enormous strength, would be the prototype for Superman. The Flash is the embodiment of winged Hermes, the messenger god. Often the hero is an everyday person in disguise. The special power is wielded when the situation demands saving lives or bringing justice

Yet even these are myths or made-up heroes.  So where did heroism first emerge?

There are many examples in history, but let’s stick with the ancient Greeks for now. The Greeks who fought for freedom in its infancy are finally getting attention. With the ‘300’ movies, a generation now knows the name of Leonidas and his three hundred Spartans. They also are aware of Themistocles and the Greek navy defeating the Persians at Salamis. Real sacrifice in the face of an overwhelming enemy. No superhuman powers, just indomitable courage.

What about today? Must we be obsessed with media darlings, movie stars and sports stars? They have their entertainment value, but what kind of heroes will help to ensure our survival in an uncertain world?

I wonder if it would be best to look for examples of selfless heroism in our everyday lives first. Parents often display day in, day out, the courage necessary to bring up a family. How can that be measured? We owe our parents so much.

There are so many wonderful role models out there. Young women like Malala who faced brutality in her fight for education for women in Pakistan.  Members of the military and their families who serve us, and sometimes suffer silently.  Educators, peace officers, firefighters. We should recognize them first.

The astronauts in the space program are heroes. We can only imagine what fortitude it took to ride a Saturn rocket, be encapsulated in outer space, leave the familiarity of earth and walk on a celestial body.

There are selfless acts of heroism every day.  What if networks as part of their news each day told stories of true heroism? Young people, those the future depends on, might be positively influenced.

Where does all this lead and why should we concentrate on this now?

We live in a dangerous world, all the more so because so often those we choose to represent us at home and abroad make decisions not based on what is right but rather on what is popular, on what will ensure re-election.

But the future of the United States, possibly Western culture, depends on leaders capable of heroism, with the courage to do what is right, putting the best interests of their country and their constituents first.  And in order to elect such people, we need to viscerally understand what makes heroes deserve the honor.  We need to elevate our national mindset as to what character traits we expect our leaders to have and maintain.

So, be entertained by the media darlings, but transfer your attention to what really matters, or we may need a hell of a lot of heroes to save us someday soon.