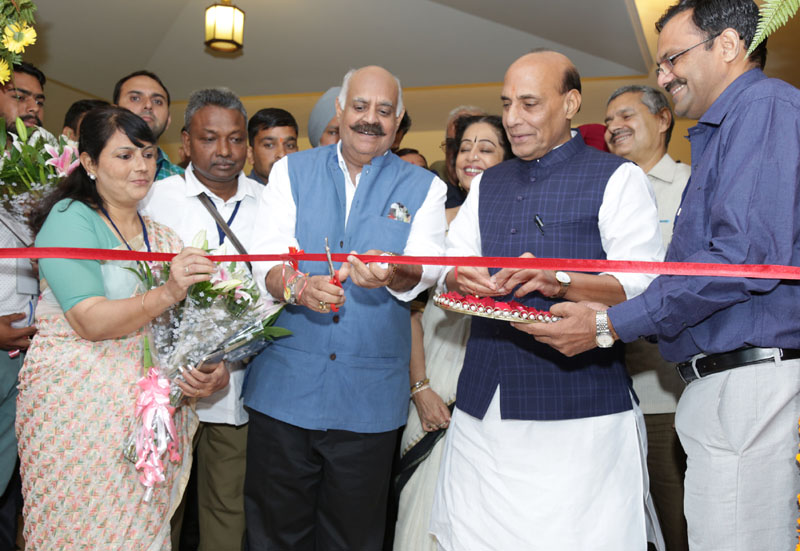 The Union Home Minister, Mr. Rajnath Singh and the Governor of Punjab and Administrator of Chandigarh, Mr. V.P. Singh Badnore inaugurating the DAVP Photo Exhibition, at the Regional Editors’ Conference, in Chandigarh on October 17, 2016.

Chandigarh (PIB-GR-TYP-BIN): Governor Punjab and Administrator of Chandigarh, Mr. VP Singh Badnore has said that media should develop self-regulatory mechanism to place true picture of the issues concerning people before the government. He said role of the media is very important in raising issues concerning to common people and it can also help in addressing these issues. The Governor was addressing the Regional Editors’ Conference on Oct 17. Citing some incidents of paid news, Mr. Badnore said that media should come forward to check this menace. He invited public suggestions to improve the infrastructure and the public convenience in Chandigarh and added that media should play its role in getting these suggestions to the administration.

Welcoming the participants, Director General of PIB, Mr. A.P. Frank Naronha said the Government considers the media as an important stakeholder in its agenda of development. “The media has an onerous responsibility as both a facilitator and a watchdog to ensure that the fruits of development are distributed to the deserving”, he said. He added the media, especially regional media, can play an important role in this venture.

Giving the background of the conference, Mr. Naronha said the Regional Editors Conference has been organized with an objective to provide an opportunity to the editors of the regional press to interact directly with the ministers on the crucial issues concerning their respective ministries. While the participants will get to know the relevant context and deeper background behind a particular initiative, programmes and policies, it will also help the policy makers in getting the feedback from the media which could be useful for further improvement, he said.

Highlighting the role of PIB in information dissemination and communication, Mr. Naronha said besides traditional modes of communication PIB is also reaching to the regional press and public through social media in big way to make them aware of government policies and programmes.