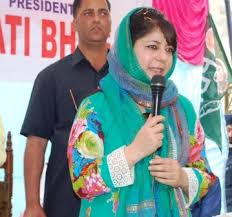 Srinagar, August 26 (Scoop News)-Calling for an end to social biases against women, Peoples Democratic Party (PDP) president, Mehbooba Mufti Monday said women are pivotal to revival of a value based society which has been scarred by violence and human rights violations.
Addressing a largely attended convention of women in Sumbal , Sonawari, she expressed the hope that women with their compassion and dedication would also participate actively in changing the political system that has degenerated into a tool of exploitation. She said while our social and religious traditions have always advocated balance in the roles of men and women, but practices like female foeticide and dowry are a blot on our society and these must be eradicated.
The convention which marked the beginning of a series of such conferences exclusively to highlight the problems faced by women invoked impressive response and several thousand women flocked the venue and participated in the deliberations with enthusiasm. The agenda for the conference was set by a college going girl, Shazia Aslam, who highlighted the problems faced by Sonawari constituency especially by the women; and the proceedings were conducted by another young women, Masarat Jan.
Mehbooba shared in detail her own experiences with the audiences and told them as to how she was inspired to take to politics after witnessing atrocities being heaped on the people of the state. She said 14 years back, when she jumped into politics the only concern in Kashmir was safety of life, property and dignity. Women, she said, were the worst sufferers as in thousands of cases they lost their male relatives and bread earners, leaving them destitute along with their families and children. In many cases, they (women) had to suffer indignities themselves at the hands of those who wielded guns in one name or the other, wearing uniform or not. She said Kashmir can never forget the valour, courage and compassion of its women who sustained the society almost exclusively, while men were exposed to tremendous atrocities.
Urging the women to play their role in shaping the political future of the state with same courage and vigour, Mehbooba said any change will be incomplete without the active participation of women in it.
Describing the national conference as the real renegade party, Mehbooba said it ditched the state at every crucial stage of history. “It was this party that forced Kashmiri youth to pick up gun in 19987 following the brazen rigging in elections and victimising the youth who participated in them. It was the Farooq Abdullah government which through the infamous task force coerced the youth who shunned the gun to work for intelligence agencies. Their policies created militancy and counter insurgency, divided the society and they are the real Ikhwan”, said Mehbooba
Mehbooba said failure of the present govt has squeezed space of dignity for all sections of society, but the women and youth are a particular victim of its wrong policies and bad governance. She said the positive initiatives, taken by the previous government, have all been reversed and the atmosphere of hope that was generated in the state has disappeared. She said while the previous PDP-Congress coalition is remembered for historic steps like disbanding of SOG, revocation of POTA, opening of borders with Pakistan Administered Kashmir and number of economic interventions, the present govt has left the people only nursing their wounds and counting dead bodies. She said for every year under the Omar Abdullah led government it has a shameful incident attached to it and those incidents have become reference points to his (Omar’s) 5-years of misrule and corruption.
She said in 2009 this government made its inauguration with the blood of two innocent women in Shopian, who were later subjected to character assassination and those who fought for justice to them were prosecuted, while the perpetrators were never caught. Similarly, 2010 witnessed cold blooded murder of 120 youth and in 2011 the death of Haji Yousuf exposed corruption and crime in the Abdullah family. 2012 marked the devastation of the historical Dastgeer Shaib (RA) shrine and in 2013, the Omar Abdullah govt participated in the shameful hanging of Mohammad Afzal Guroo.
Mehbooba said the PDP has grown impressively in Sonawari constituency under the local leadership of the district president Bandipora, Mohammad Yasir Reshi. Given the centrality of Sonawari and enthusiasm among the workers in the area, Mehbooba expressed confidence that the sentiment for change could soon become a wave that would liberate J&K from the exploitation of National Conference and its politics.
Mehbooba said, she and her party are connected to the ground and, therefore, completely conscious of the problems of the common people. She said the state has a huge deficit of amenities like education, skill development, health, power, water and connectivity and “we have the capacity and resolve to solve these problems”.
Chief spokesperson , Naeem Akhtar; MLA Bandipora, Nizamuddin Bhat and Basharat Bukhari, MLA and district president Baramulla were present on the occasion.
MORE AT http://scoopnews.in/det.aspx?q=31511