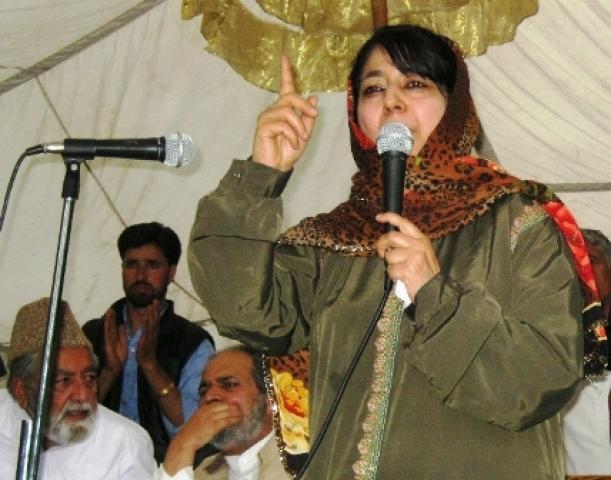 , March 4 (Scoop News) -President of the Peoples Democratic Party Ms Mehbooba Mufti today expressed her party’s dissatisfaction with Chief Minister’s reply to the debate on the Adjournment Motion moved by her party on the execution of Mohammad Afzal Guru. PDP leader told the House that the Government had failed to give any assurance on the return of the mortal remains of Afzal Guru to his family. She told the House that instead of making any substantial commitment on the return of the mortal remains or offering explanation on the shameful conduct of his government around the hanging of Afzal Guru, the Chief Minister had arrogantly justified the official repression in the shape of curfew and media gag in .

Earlier while opening the debate in the House on Adjournment Motion, Ms Mehbooba Mufti made the following points that No body had expected that the government of India would execute Afzal Guru in view of its apprehended adverse impact on the situation in the State where the government had invested a lot ever since the time of former Prime Minister Atal Behari Vajpayee who had declared to solve the Kashmir problem under the ambit of humanity (Insaniyat ke dairey mein). After that a lot of initiatives were taken which conveyed a feeling among masses of Kashmir that perhaps the government of was serious in giving them a fair deal, justice and respect. She said that hanging of Afzal Guru was a shocker  which hit everybody like a bolt from the blue. She said that it was a setback to the peace and reconciliation process.

The State Government and Chief Minister could not wash their hands off this decision as they are part of the ruling coalition in as well as in the State. When Afzal Guru was taken from to in 2001, National Conference was ruling the State and was part of the NDA government at Centre. She further added that if governments of Tamil Nadu and Punjab can pursue cases of the killers of former Prime Minister Rajiv Gandhi and former Chief Minister of Punjab Beant Singh, why Government of Jammu and had not taken any step to pursue mercy petition of Mohammad Afzal Guru.

Ms Mufti, while quoting from statements of  various experts including the eminent jurist Fali Nariman, said that Afzal Guru was not directly involved in storming the Parliament or killing any persons during the attack. Hanging of Afzal Guru was wrong and at least his family members should have been given prior information. She quoted jail manuals and said that at least Galib, son of Afzal Guru, should have been allowed to meet his father one last time. “You are a father. If you go somewhere for five days, you want to see your son” Mehbooba told the chief minister in a choked voice. She said that entire country was discussing the killing of Parbhakaran’s son but justice was also denied to Galib. Parbhakaran was an established terrorist and but Afzal’s direct involvement was not established in any such act. His son too deserved justice and constitutional right.

PDP president further made it clear that when legal process was completed on Afzal Guru case, the PDP had completed it tenure.

During the debate, when Law Minister Mir Saifullah tried to blame the PDP-Congress coalition, Ms Mufti retorted that the hanging would never have been allowed by Mufti Mohammad Sayeed. “It needs a Tara Masih (hangman)- a role that is played only by one family in the State”

She also demanded that State Government should provide legal helps to all those innocent youth who have been languishing in different jails across the country.