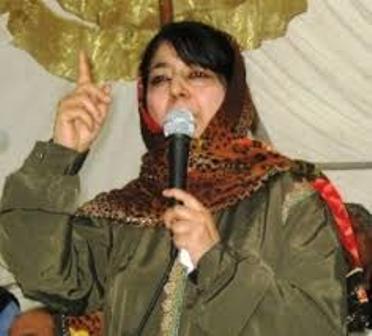 Srinagar,August 06 (Scoop News)- Dubbing the present government as a misfortune for the State, opposition Peoples Democratic Party (PDP) today said the people of Jammu & Kashmir seem to have become the victims of the ungoverned rage let loose on them by the NC-Congress coalition.
“There is a complete chaos all around with acute scarcity of rations hitting almost every part of the state, power position deteriorating day by day, drinking water supply becoming scarce, treasuries running dry, pensioners being denied pension, contractors crying for payments, daily-wagers and consolidated workers pleading for their wages, people being made hostage on roads for hours together due to horrific traffic jams and so on and so forth,” PDP president Ms Mehbooba Mufti said in a statement.
Lashing out at the State Government for pushing the people into an anarchic and distressing situation, Ms Mehbooba said the present government seems to have no regard even for religious occasions of great significance like Eid so that it could have ensured basic minimum necessities like rations, drinking water, power supply, pension and wages for its workers for the upcoming festival.
She said the present Government’s formal arrival in J&K in 2009 has brought with it worst kind of atrocious miseries for the people. “While the people have lost hope of any significant developmental initiative being accomplished by this government, the tragedy is that it is not able to even ask the administration to ensure at least respectable supply of rations, water, power and other such facilities to the people,” she said and asked the Chief Minister to wake up from the slumber and do some justice with the high office he is holding.
Reminding Omar Abdullah of the promises made by him during electioneering to 2008 assembly polls, Ms Mehbooba said the people want to know where is the much-parroted Truth and Reconciliation Commission on human rights violations, where have the one lakh jobs that were to be given in the first three months of the new government gone, what happened to the promise of one job to each family, where is the stipend for the educated unemployed youth, what happened to the commitment of bringing down educational qualification for recruitment of police constables to middle pass and last but not least there is also no word from the Government about removing the electricity meters, slashing the power tariff, making electricity available round-the-clock and subsidizing the LPG and rations promised by NC during electioneering.
She said the people have already started running out of patience with this nonstarter Government as their miseries are multiplying with each passing day. “Ironically, Chief Minister Omar Abdullah has kept himself too busy in making hilarious noises on issues that mostly fall out of his domain,” she said and added that the Chief Minister seems to be is resorting to such histrionics only to hide his countless failures on the home turf.

Filed under: News, Politics
Share Tweet Pin G Plus Email
previous article: We Are Negotiating With Sudan to Let the Oil Flow, Says Kiir
next article: Protests in Jammu over the killings of 5 soldiers in Poonch Sector