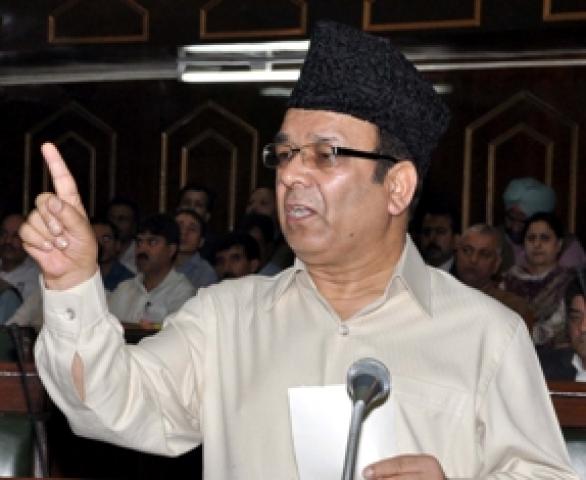 Jammu, March 20 (Scoop News) – Asserting that all the members of the concerned District Development Boards (DDBs) are being consulted while formulating and finalizing the district plans, the Minister for Finance and Ladakh Affairs,  Abdul Rahim Rather today said that a district plan cannot be implemented without the consent of concerned Board members.

Speaking to media persons soon after the conclusion of the Question Hours in Legislative Assembly today  Rather rejected the allegations that members are not being consulted during the process of district Plan formulation adding that the Government is ready to present the relevant records on the floor of the House to prove that district plans have been approved by the concerned Members adding that their signatures on plan documents is testimony to this fact.

He said it was most unfortunate that some members want to play to the galleries on the issue merely for political mileage. He said that some Members have admitted on the floor of the House that they sign the plan documents when these are submitted to them.

Elaborating on the functioning of DDB’s,  Rather said the concept of single line administration/ DDB’s was conceived by Sher-e-Kashmir Sheikh Mohammad Abdullah in 1975 with the objective to decentralize planning process at gross roots level so that need based plans are formulated by Public representatives which include MPs, MLAs, MLCs and even Panchayat Raj Representatives. He said earlier, the concerned District Development Commissioners were chairmen of the DDBs but after 1996, the government took a policy decision to make a senior Minister chairman of a DDB.

However,  Rather said during the course of meetings of DDBs, a number of recommendations are made which involve policy decisions and huge financial implications, adding that such recommendations are, therefore, examined in the respective departments to ascertain and establish the feasibility and viability of implementation and are therefore processed for implementation in a phased manner keeping in view the availability of resources.

Rather said that unfortunately some of the opposition Members have developed a habit to raise the issue but have no courage and patience to listen to the replies from the government.

Responding to question about ’s leasing out some parts of POK to ,  Rather said such sensitive issues cannot be discussed in the House without proper permission of the Speaker, for which a member has to give prior notice to the Assembly Secretariat. It is only after Speaker gives permission and allots time that an issue can be discussed in the House.

He said there are prescribed Business rules for raising important issues but unfortunately, at times, rules of procedures are not followed which dilutes the issues sought to be raised and go un-responded.