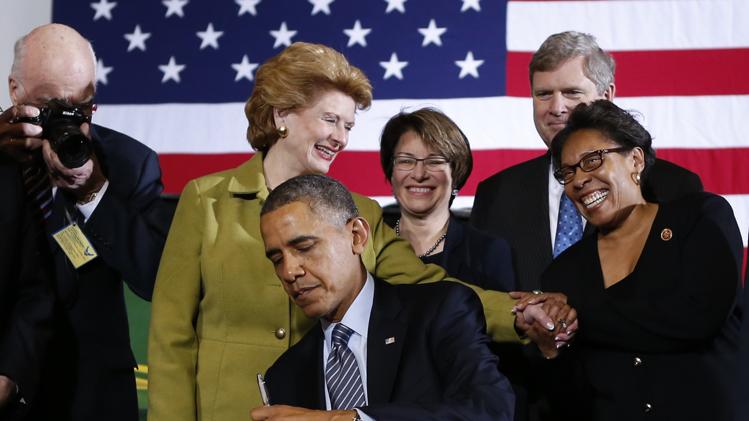 “We authored this bill because mental illness touches all of our families in some way, one out of four Americans. For me, it was my father who suffered from bipolar disorder and was not diagnosed for at least 10 years when I was growing up. I saw the impact on my dad, the most loving, wonderful father someone could have, on my mom, on my brothers, our whole family, as we struggled to figure out what was going on and get him the help and support he needed”, said Senator Stabenow. PIctured here Senator Stabenow with President Obama.

On March 31, 2014 Senator Stabenow from Michigan asked for permission to address the United States Senate regarding the Excellence in Mental Health Act. This is part of what she said:

“Mr. President, today marks the culmination of a long fight to improve community mental health care in our country. Last Thursday the House of Representatives passed the Protecting Access to Medicare Act, which includes a demonstration project based on the Excellence in Mental Health Act that my friend and partner from Missouri Roy Blunt and I authored…

Our legislation is a landmark step forward for community mental health funding, one of the most significant advances we have seen in decades. This bill will improve the lives of people all across the country by providing funding to create 24-hour emergency psychiatric services and higher standards and funding for community care.

We authored this bill because mental illness touches all of our families in some way, one out of four Americans. For me, it was my father who suffered from bipolar disorder and was not diagnosed for at least 10 years when I was growing up. I saw the impact on my dad, the most loving, wonderful father someone could have, on my mom, on my brothers, our whole family, as we struggled to figure out what was going on and get him the help and support he needed.

When he finally was accurately diagnosed and received the right treatment and support, got the right tools to manage this disease, he was able to go back to work and live a happy and rewarding life for the rest of his life. Similar to my dad, too many people who need treatment do not get it, including one-third of all people living with mood disorders and more than half of those with severe mental diseases.

That is because in this country we treat mental health and physical health differently. If you have diabetes, you monitor your sugar levels, you take insulin to manage your disease. You go on with your life as you are managing your disease. If you are bipolar, meaning you have a chemical imbalance in the brain, you may receive zero treatment, maybe lose your job or worse your family, maybe end up in jail or on the streets.

Diabetes and bipolar disorders are both chemical imbalances in different parts of the body. Both deserve treatment. People deserve to be able to get effective treatment for both. Both are treatable–both are treatable. The same is true for schizophrenia and many other behavioral diseases. There is hope when people get help.

There is treatment available and from that the ability to manage diseases, as we do for so many physical diseases that people have. This bill which we just passed in the Senate will make it more likely to happen that people can get the treatment and support they need. This bill makes great improvements in the way we treat mental health care as well. It will expand access, make sure people get treatment at a higher quality level, because just as we do with federally qualified health centers, we are now creating federally qualified behavioral health clinics.

If you meet higher standards, you get higher reimbursements and therefore more services available. This legislation authorizes eight States to be designated to receive enhanced funding for community mental health services, based on meeting high-quality standards for services, as I said before, for the designation of federally qualified behavioral health clinics.

This is voluntary. States will compete to be designated as one of the eight demonstration States. I expect many States and communities across the country to be working together to do that. I fully expect this demonstration project will save lives and save money to communities in every State that is housing people in jails who should be getting the treatment they need in the community in order to manage their diseases and live productive lives.

Following his lead, Congress sent him the Community Mental Health Act. It was the last bill he signed before he was murdered in Dallas. It is one of the most important bills that he signed. Senator Blunt and I spoke on the Senate floor last fall to commemorate the 50th anniversary of that bill’s signing because it marked a major change in the way we treat mental health.

Unfortunately, over the past few decades, instead of increasing funding for mental health services, we have seen cut after cut after cut. We are seeing the consequences. Inpatient facilities all across the country have closed their doors, but they have not been replaced by services in the community. Too often we are turning the emergency room or worse to jails or prisons as our primary mental health treatment facilities.

As Cook County, IL, Sheriff Tom Dart testified in the House of Representatives just last week, “The unfortunate and undeniable conclusion is, that because of dramatic and sustained cuts in mental health funding, we have criminalized mental illness in this country.”

The ER and the jails are not the place to treat mental illness. We can do better than that in this country. We have now taken a major step to do that. Our families deserve better. That is why our former colleagues Senator Pete Domenici and Senator Paul Wellstone, a dear friend to so many of us and whom we miss dearly, and later another dear friend, Senator Ted Kennedy, whom we also miss dearly, a towering figure on so many issues, joined together with Senator Kennedy’s son, Representative PATRICK KENNEDY, and wrote the bipartisan Mental Health Parity and Addiction Act. They wanted to make sure we had parity in how insurance companies treat mental and physical health. That bill became law finally in 2008. It was a huge step forward.

I have met and heard from so many people who personally felt the effects of mental illness and who wanted us to pass this bill so they and others could get the treatment they need.

One of those people who joined us–in fact, today at a press conference, flew in from Michigan–is Malkia Newman, who lived for over 30 years with undiagnosed bipolar disorder. She finally got the treatment she needed through the Oakland County Community Mental Health Authority in the Detroit suburbs.

She recovered, is now managing her illness, and is the board chair of the very same mental health board community she turned to for help so she can help others. Her message to Congress is: “Please pass this bill so everyone can get the mental health help they need.”

Not everyone is as lucky as Malkia, though. There are many who still need our help, which is why what we have done today is so important.

Today, one in four returning veterans from Iraq and Afghanistan is in some need of some form of mental health care treatment. I recently heard from Marcia in Dearborn about her friend.

My friend bravely served two tours in Iraq for this country. Before he left for war, he was so outgoing and all he wanted was to put a smile on everyone’s face. He had the biggest heart of anyone I know. But when he came home from war with PTSD, her friend was in trouble.

Her friend killed himself after suffering from PTSD for 8 years. Marcia’s friend is only 1 of the 22 veterans who take their own lives every single day in America. This is where our bill comes in. This bipartisan bill expands access to mental health care, working with outpatient VA clinics, working with community mental health centers, and federally qualified mental health centers, all working together. I thank so much the Iraq and Afghanistan veterans for being with us every step of the way, advocating, all of the veterans organizations that have been so supportive. This bill will create a broad range of mental health services, such as 24-hour crisis psychiatric services in communities that are selected, integrated preventive screenings, integrated treatment for mental illness and substance abuse, and expanded peer support and counseling for families and patients alike.

Instead of merely talking about mental health in the wake of tragedies such as the Navy Yard in Washington last fall that took 13 lives or the tragedy at Sandy Hook, we have taken action this evening.

Senator Wellstone isn’t here to see the progress we have made, but he once said:

That is exactly what we are doing, improving people’s lives and creating hope and opportunity for people to get the help they need to live long, successful lives.

I thank all of our colleagues for working together to get this done. It will be something, as we move forward, of which we can all be proud”, said Senator Stabenow.