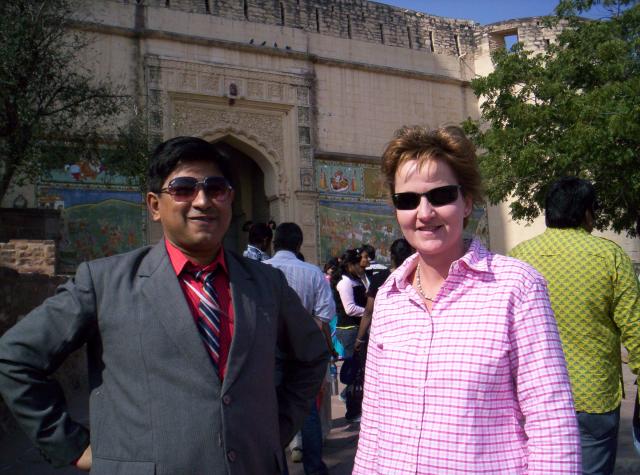 Mesmerizing Mehrangarh.
Jodhpur charms the tourists all across the country with its typical Rajashthani landscape.The city is known for its forts and unique culture. It is the second largest city in Rajasthan after Jaipur. A certain section of the society also call it blue city or aasmaan nagari as many houses are painted blue near Mehrangarh Fort.
A number of forts in Rajasthan are remembered for their unique architecture including the Golden Fortress (also called Sonar Kella) in Jaisalmer, the Nahargarh and Jaigarh Fort in Jaipur, the Taragarh Fort in Bundi, the Junagarh Fort in Bikaner, etc. Mehrangarh Fort is the most famous fort of Jodhpur. It is located at 150 meter high hill. The hill used to be called Bhaurcheeria meaning the mountain of birds. Rao Jodha, the Chief of Rathore clan built it in 1459. The walls of Mehrangarh Fort are 36 meter high and 21 meter wide. There are seven gates including the Jayapol meaning victory gate. It was built by Maharaja Man Singh to commemorate the victories over Jaipur and Bikaner armies. The other gates include Fateh Pol built to commemorate the victory over Mughals in 1707, Dedh Kamgra Pol, bearing scars of bombardment by cannon balls, Loha Pol, which is the main gate to the fort complex. Immediately at the left are the handprints (sati marks) of the ranis or queens who burned in the funeral pyres of their husband, Maharaja Man Singh.
The museum of the Fort is well maintained. There are entry fees and also fees for carrying camera inside the museum. In one section of the museum there are old royal palanquins including the Mahadol Palanquin, won in a battle from the Governor of Gujarat in 1730. The arms, costumes and paintings depict the history of the rulers of the place. Within the fort there are brilliantly decorated palaces including the Moti Mahal, (Pearl Palace), Phool Mahal, (Flower Palace), Sheesha Mahal (Mirror Palace), Sileh Khana, Daulat Khana, etc. There is also a turban gallery. There is also famous Chamunda Mataji Temple in the Fort. Maa Chamunda was the Kul Devi of Parihar Rulers of Mandore. On September 30th, 2008, around 250 people were killed and more than 400 people injured in a stampede on the day of Navratri. The ramparts of the Fort had preserved the brilliant cannons include the famous Kilkila, the old cannon. Salman Khan’s film Veer was shot in Mehrangarh Fort. From the rampart the entire city of Jodhpur can be witnesses giving a panoramic view. A lift is available for the visitors who cannot climb the Fort.
Visitors should visit the Fort in the months of December, January and February. The weather remains chilly, the sunshine absolutely romantic and the site of the Fort totally mesmerizing.
Filed under: Lifestyle
Share Tweet Pin G Plus Email
previous article: I Am a Dreamer, But Not the Only One
next article: Lifecycle of Birds