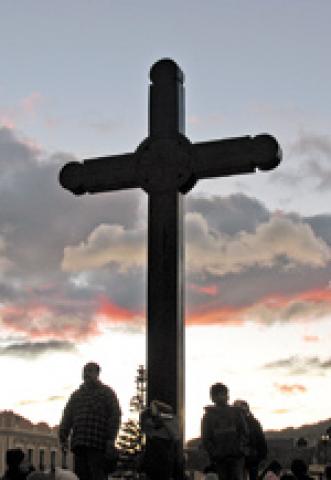 In Mexico, the Catholic Church walks a fine line between two forces:  narco-traffickers and the government.

Although the Church does not readily concede that it benefits from narco donations, people are aware of the influence of drug money in their churches. "Of course the narcos paid for the church,” said a resident from a town in Sinaloa, one of the most drug infested states. “Just like they paid for the schools and the roads and the mayor."

"It´s unconscionable. On one side, the president is declaring war on organized crime; on the other side, the Catholic Church accepts donations from disreputable sources," said Arturo Farela Gutiérrez, head of Confraternice, a network of Christian and Evangelical churches in Mexico.

Instead of denying the relationship, some Catholic leaders defend it, suggesting it is a way for the drug traffickers to repent for their sins. "The drug traffickers are very generous in their communities. They install electricity, telecommunications, highways," said Carlos Aguiar Retes, the president of the Mexican Bishops´ Conference and bishop of Texcoco. "They are very generous, and often they also build a church or a chapel."

In Mexico, drug traffickers openly flaunt their professions, taking part in society as establishment members and mingling with local politicians, police chiefs, and the church.

But the rising level of violence in the country is calling the cozy relationships into question. The church’s connection to powerful drug traffickers is in direct conflict with a federal government engaged in a brutal war against them.

Those who disagree with this position by the church are becoming more and more outspoken. "There have been too many cases in which priests and bishops admit their closeness with drug traffickers,” Farela Gutiérrez said. “The narcos make a donation, thinking it will purify them. The Bible says that it is not the way of Jesus Christ to forgive criminals." He has complained to the Attorney General, requesting an investigation of the Church-narco links.

Some Catholic Church leaders refuse to be pawns of the drug traffickers, instead asking for strength to keep away the benefits they could realize from drug money. Several priests make it clear that they are not welcome in their churches to participate in baptisms, weddings, funerals and other rites, nor will they accept donations.

Mexican citizens are also protesting the practice. In Paracho, large public protests have backed priests’ positions to take a stand against those who have made pacts with the criminals.

Officially, the Church abhors the narco relationships. Cardinal Norberto Rivera cautioned priests not to “make deals with evil … deals with those who will use violence."

"Calderón´s on a campaign, many soldiers are dying," said Farela Gutiérrez. He said the narco liaisons are profits that came from injustice, and the death of many Mexicans. “The federal government needs to intervene to instill order into the Catholic Church."