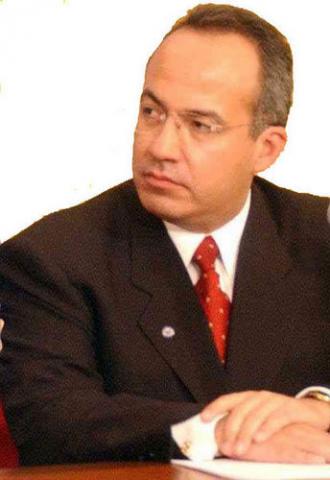 Although President-elect Obama’s meeting with Mexican President Felipe Calderón is considered by some to be largely ceremonial,  Calderón has a wish list of topics to bring up when he visits Obama in Washington, D.C. today.

He hopes to advance the relationship with Obama and promote fundamentals for a strategic association, especially in regard to organized crime and narcotrafficking, trade, and the migration question.

Calderón calls organized crime a global and transnational challenge that must be confronted at global and multinational levels, and says that Mexico has put the subject on the table not just with the United States, but with Central America, Latin America and the entire world.

Saying that the economies of both the U.S. and Mexico complement one another — with one being capital intensive and the other labor intensive – he feels this is a near textbook case on economic and international trade where the two nations can benefit from better regional competitiveness.

Calderón is expected to promote a goal in 2009 of finding a solution to “the migratory problem,” feeling that the contributions of Mexicans to the United States’ economy is fundamental. “It is, precisely, the Mexican worker who is making a major contribution in terms of competitiveness in an economy that urgently needs competitiveness," Calderón said.

"If what those Mexicans contribute in taxes is measured truly, compared to what they receive in social benefits, the current net value in contributions to North American public finances is much greater than (that received by) our compatriots in the United States, to the degree that the possibility of financing their own pension and health systems in the future basically depends on revenue from Mexicans…." he added.

Calderón will likely find Obama receptive to his ideas, but may find them put on the back burner as Obama struggles to cope with wars in Afghanistan and Iraq and the downspiraling economy at home.

"The chance of having immigration reform is like having it snow in the desert," said George Grayson, a Mexico expert at the College of William & Mary in Virginia. "With the unemployment rate surging in the United States and the economy expected to shrink this year, it is not a hospitable time to invite more workers into the country."

Filed under: US, World
Share Tweet Pin G Plus Email
previous article: Tug of War game
next article: Waging a war with bits and bytes.