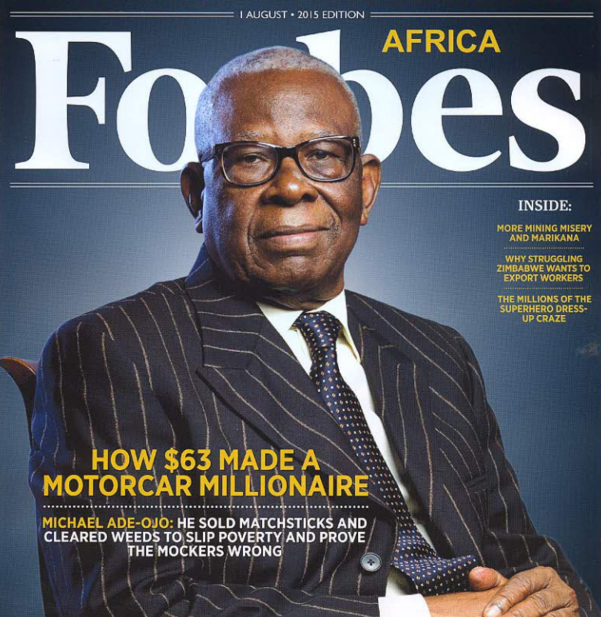 In August 2015, Forbes Africa dedicated its cover story to the entrepreneur Michael Ade-Ojo, who was presented as one of the great business leaders on the African continent. He became a multimillionaire in the automobile industry starting with only $63 in capital. His unusual story has attracted attention and admiration as forecasters are turning to Africa and its promising markets.

Michael Ade-Ojo, a Man Who Started From the Bottom

Today an auto industry magnate, Michael Ade-Ojo was born in 1938 in the town of Ilara-Mokin, part of the Akure metro area, the capital of Ondo state in southwest Nigeria. At a very early age he started working as a street vendor selling charcoal, food and firewood. Today, the man who some call “Mr. Toyota” sells vehicles of all types: cars, trucks, vans, buses, tractors, motorcycles and even fuel, lubricants and financial services, such as auto and life insurance. In a country of 170 million inhabitants that is today Africa’s largest economy, the market is both promising and constantly in flux.

Michael Ade-Ojo started selling cars in 1965, five months after receiving his Master’s in business administration at the University of Nigeria in Nsukka, located in the southeast of the country. The self-made man still enjoys telling the story of his first sale: “The first car I sold was a Wolseley, made by the British Motor Corporation. I sold it to M. Okubanjo, a permanent secretary in a government department. We’ve since become friends. That’s how I got my start in the automobile industry.” He worked at the time for the CFAO group, a French distribution company, which he joined directly after university; his last two years of university were actually paid for by the company. But in 1966, after managing to sell 20 trucks to the Electricity Corporation of Nigeria (ECN) as a simple salesman, his New Zealander manager took credit for the operation. Angered, Michael Ade-Ojo put up a protest. In the end, CFAO decided not to renew his contract in December 1966 and he found himself out of a job. He then joined the British oil company BP, at first as a temporary replacement in Benin City. In three months the Nigerian managed to increase sales in the local division by 25%. But once again, the idea of seeing his work attributed to another person led him to put an end to the adventure.

Back in Lagos, Michael Ade-Ojo approached the RT Brisco Group, an important distributor of trucking and automobile equipment, offering to sell their products for a commission. His audacious proposal was accepted, and during his annual vacation with BP he started his career as an independent reseller. “In fourth months,” he noted, “I succeeded in selling 40 cars. I got a pen and paper to calculate my commission, and to my great surprise, selling these 40 vehicles was going to earn me more than a whole year’s salary at BP.” He then definitively quit his job at the British petroleum company to finally make his own way.

In August 1971, he founded Elizade Independent Agencies (EIA) with his first wife, Elizabeth Wuraolo Ojo, who he had met at university. From then on, his rise to the top was unstoppable: he acquired a license to sell Toyota products in all of Nigeria (under the name Toyota Nigeria Limited), making the Japanese firm one of the best known automobile brands in the country and earning him the nickname “Mr. Toyota.” After a series of acquisitions, Michael Ade-Ojo ended up owning 100% of RT Briscoe in Nigeria and 74% of Toyota Nigeria Limited. His empire now also includes a multitude of other companies and organizations, including Elizade University, Elizade Autoland, Crow Motors Nigeria Limited, Classic Motors Ltd., Okin Travels Ltd. and Odua Creations Ltd. Among his other functions, he also presides over Toyota Nigeria Limited and SMT Nigeria Limited, the official distributor of Volvo Construction Equipment, Volvo Trucks and Mack Trucks in Nigeria. This last company is a joint-venture, created along with Philippe de Moerloose, the founder and head of the SDA-SDAI consortium and a specialist in the distribution of automobiles and industrial equipment in Africa. Michael Ade-Ojo is also the director of several banks, including Ecobank Nigeria and First City Monument Bank. The unstoppable entrepreneur, wearing many hats, was able to seize upon the immense potential of the Nigerian market before others.

“All of my investments are in Nigeria. I believe profoundly in what many call the ‘Nigeria Dream,’” Michael Ade-Ojo declared in his interview with Forbes Africa in August 2015. His vision matches up with numerous experts, who see this great African country as one of the most promising for the automobile sector, both for new and used cars. In 2014, 53,900 new vehicles were sold in Nigeria, 42,000 of which were for the consumer market. Toyota now holds about a third of the market share in the country, ahead of South Korean companies Hyundai and Kia.

As the most populated country in Africa, and recently the largest economy, Nigeria has effectively become the new El Dorado for the automobile market, and manufacturers are rushing to join the frenzy. Following in the footsteps of Peugeot, Nissan, Kia, Honda and Volkswagen, the giant American carmaker Ford recently announced its intention to open a new assembly plant before the end of 2015 in what is predicted to be the third most populated country in the world by 2050. Though the market is promising, the European, American and Asian manufacturers have another reason for setting up shop there: by manufacturing within Nigeria, these large auto groups can avoid a 35% tax on new vehicles imported into the country – in addition to a 35% customs duty – that was put in place by the government in 2014. This measure was primarily intended to encourage industrialization and the creation of jobs on the national level.

In declaring that “Nigeria is a priority market for us in Sub-Saharan Africa,” Ford’s Sub-Saharan Africa director Jeff Nemeth confirmed the sector’s growing interest in this economic region. In an interview given to Reuters, he even added that given the evolution of Ford’s business in Nigeria, the factory based in that country could be used to service all of the West African market.

Belgian businessman Phillipe de Moerlose confirms this trend: “For demographic and economic reasons, Nigeria is today one of the most promising markets in Africa, especially for the automobile distribution sector.” The founder and head of the SDA-SDAI consortium, Philippe de Moerloose has known Michael Ade-Ojo for nearly 10 years through his work with SMT Nigeria (a subsidiary of SMT Group which is owned by SDA-SDAI). “I’m very happy with our partnership, which has been going on for almost 10 years now. It’s a win-win relationship: Michael Ade-Ojo, who is a formidable business leader, brings us his knowledge of the Nigerian market while we bring our expertise and experience from across Africa to SMT Nigeria’s staff. This profound knowledge of the market, together with a high-quality distribution scheme, is at the core of our Nigerian subsidiary’s success,” adds Philippe de Moerloose, the entrepreneur and well-recognized speaker on the particularities of the African market.

Michael Ade-Ojo’s experience, as well as statements from actors across the African auto market, mirror the words of Carlos Ghosn. The boss of the French manufacturer Renault, Ghosn believes that it’s only a matter of time before the Nigerian market takes off. “Nigeria is the Brazil of tomorrow,” he declared in an interview with Jeune Afrique in January 2015, claiming that his brand was well positioned to take advantage of the new opportunities in the country. The rise of the Nigerian automobile sector (and likely others as well) now seems inevitable, and those who made bets in this market are finally seeing them pay off.