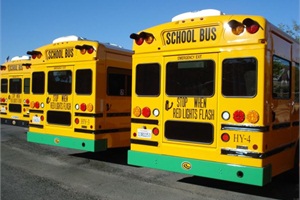 “With close to fifty thousand school buses, New York State has to start thinking of a transport system that is more energy efficient”, says Michael Tornabe, the man at the helm of Logan Bus Company, a privately owned school bus company that has over 2000 contracted routes.

New York has already begun looking into alternatives by purchasing 2 hybrid school buses. The idea is to have cleaner buses that are energy efficient and make use of hybrid-electric technology. They are to be powered by an 80 kilowatt hybrid drive system, which will be powered by a company known as Enova System.

The buses were purchased through a consortium of school districts from various states. They have come together to purchase hybrid-electric school buses. The goal of this consortium is to encourage those who manufacture school buses to provide energy efficient buses that are cleaner and that will use this technology. Members of the consortium come from Iowa, New York, Washington, Pennsylvania, Arkansas, Virginia, Oregon, North Carolina, Texas, South Carolina and Florida.

In New York, 2.3 million children are ferried to and from school daily. Governor Pataki has already provided funds from his Clean Air/ Clean Water Bond Act so that NYSERDA can have two thousand five hundred school buses that ply eighty-four school districts to be fitted with technology that controls emissions. In addition, buses that use alternative fuels 100% have also been purchased.

Even though steps have been taken to reduce emissions from school buses, there are still many out there that have not been modified in any way. Some of the methods used in the reduction of emissions include the purchase and installation of emission reduction technologies, such as diesel oxidation catalysts that have been purchased for one thousand four hundred and twenty-six buses that carry children in NYC.

Hybrid-electric buses, like the 2 battery powered ones that have already been purchased, will go a long way in improving the quality of air that the children and other New Yorkers breathe in. 19 more hybrid-electric buses have been ordered to be used by the 11 states that are part of the consortium.

About Michael Tornabe
Michael Tornabe started at Logan in 2003. When Michael started, Logan Bus Co & Affiliates had 700 contracted school bus routes with the New York City Department of Education. Now, in 2016, Logan Bus Company is the largest private school bus operator in New York State. With over 2,000 contracted routes, Michael has expanded Logan bus beyond imagination. Since it touches directly on his business, the development of hybrid electric school buses in New York is a topic of particular interest to him.

An Entrepreneur at heart, this is not the first business Michael Tornabe has been successful in. An inventor and holder of a few patents, Michael Tornabe Logan has always been on the right side of entrepreneurial success. Prior to Logan, Michael founded a successful Roofing business out of Long Island, New York.

While a businessman by every sense of the word, Michael Tornabe would rather be “under the bus”, than above it! Michael Tornabe bus is an avid car lover at heart. He loves muscle cars made in America, and despite his busy work schedule, still finds some peace and quiet to get under the hood of the car and work on his vehicles. This is a testament to Mr. Tornabe’s excellent expertise when dealing with school bus maintenance. Logan’s bus fleet is one of the top of the line bus fleets.

Michael Tornabe is a frequent supporter of various charities, such as the Queens Boys and Girls Club, Wounded Warriors, the NYPD, FDNY, NY State Troopers. Michael understands the importance of our men and women on duty, and how important it is for them to protect our children so that they can continue to get the education they deserve. Learn more at
http://www.loganbuscompany.com