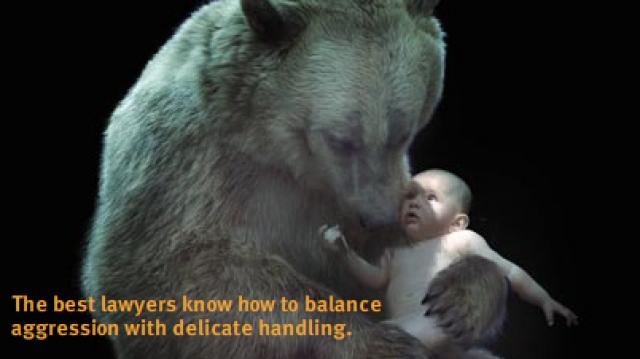 Boston lawyer Michelle Moor has sued former employer Bingham McCutchen, saying they failed to investigate her allegation that she was drugged at a company party.

Bingham McCutchen denies any wrongdoing.  Their advertising motto, featured in publications like the Economist, is certainly not helping.  The ad, pictured at right, shows a bear cradling a baby with the terms:

"The best lawyers know how to balance aggression with delicate handling."

Ms. Moor says that she attended a firm party as a summer associate, and though she only had two glasses of wine, quickly felt disoriented.  During a visit to the emergency room later that night, they found Tegretol in her blood.  Tegretol can cause memory loss when taken with alcohol, and is meant to treat seizures.

When Moor told a female Senior Associate at the firm, she found out the woman had been drugged and raped the year before, but did not tell anyone for fear of sabotaging her career.

Then at a dinner party, a coworker made the comment that he enjoyed giving women date-rape drugs, or "roofies", and raping them.

Moor reported all cases to the human resources officer for the firm, which she alleges did nothing.

The man was not confronted, and Moor pressed on.  Eventually she was told to move to another floor, and though the coworker left the firm beforehand, Moor ultimately left because of social tension at the firm.  She now works at Kotin, Crabtree & Strong.

According to Michelle Moor’s LinkedIn profile, she is a committed to doing the right thing.  Moor has been a Peace Corps Volunteer in Health Services and a Blood Donor Recruiter.  Ms. Moor was also a lacrosse star at her alma mater Vassar.

Bingham is denying everything, and in an internal memo, said they were "disappointed" that Ms. Moor filed the complaint.