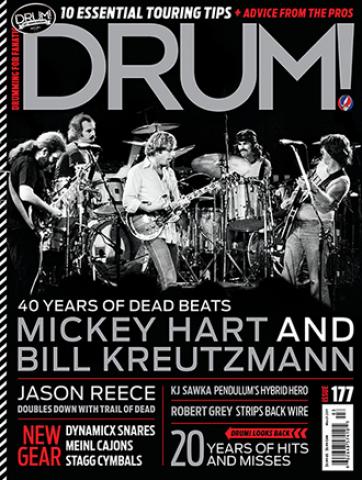 San Jose, Calif., — The editors of DRUM! Magazine are a patient bunch. After all, they’ve tried for the past two decades to secure a cover story on Bill Kreutzmann and Mickey Hart, the former drummers for The Grateful Dead. But while Hart always seemed game to talk about drums and drumming, and was over the years featured in many DRUM! articles, Kreutzmann proved far more elusive about granting a dual interview.

Until today. The March 2011 issue of DRUM! Magazine has just hit newsstands around the world with the first Hart/Kreutzmann cover story ever published in an international drumming magazine.

“Believe it or not, it’s actually taken more than 20 years to get them to grant a dual interview,” says DRUM!’s founding editor Andy Doerschuk, who currently oversees the company’s Web site and other digital initiatives. “I first tried to set up a cover story with Mickey and Bill way back in 1987, while I was the editor of Drums & Drumming magazine [then published by GPI Publications]. Back then I was working with Dennis McNally [the Dead’s longtime publicist] — Jerry was still alive and the band was active.”

Featuring a mix of current and archival photos shot by San Francisco photographer Jay Blakesburg, the article reveals to readers the camaraderie that long ago developed between these drumming legends, and covers their work together from the earliest days of the Dead to the pair’s recent Rhythm Devils project.

“I was honestly amazed by the level of enthusiasm both drummers still have for the music,” says DRUM! managing editor Dave Constantin, a lifelong Grateful Dead fan, who conducted the interviews at Hart’s Sonoma county ranch. “It was like interviewing two big kids. But it really drove home what a powerful bond these two have formed over the past 40 years.”

The March 2011 issue of DRUM! is currently available on newsstands or by logging onto http://www.entermusicstore.biz. To subscribe visit, http://www.drummagazine.com/subscribe.