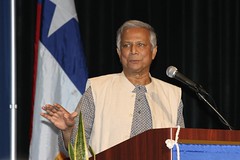 Ever since Muhammad Yunus won the Nobel Peace Prize for his initiatives in micro finance, the sector has been attention that had hitherto been denied it. The Professor himself has been toasted around quite a bit and the Grameen Bank has now been invited to set up shop in Assam. But the success and spread of micro-finance in India has been patchy and mostly confined to the South Indian states where there has been a long history of thrift and credit societies and then subsequently of Self Help Groups. Typically micro finance programs have had three common characteristics in India at least –a) they have been women-centric, b) They have had an NGO non profit mindset, which has meant that business viability has been undermined) They have had a rural focus. 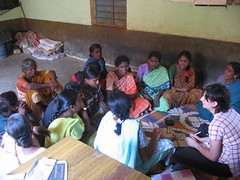 “Experience shows that microfinance can help the poor to increase income, build viable businesses, and reduce their vulnerability to external shocks. It can also be a powerful instrument for self-empowerment by enabling the poor, especially women, to become economic agents of change.”

But micro credit has had a very limited audience to play to. In the highly patriarchal societies of North India, where women rarely are allowed out to step out of their houses, let alone assemble in groups; the gender skewed methodology of first forming groups of women and then offering loans would not work. Neither would they typically work in highly urban societies which lack the homogeneity of rural communities and the system of trust and honor on which the foundations of repayment and low defaults are built. But to scale up and really make a difference to those outside the normal banking channels, microfinance institutions need to innovate.

As Vikram Akula of SKS Micro Finance puts it, the three key issues that a micro finance institution usually faces are lack of capital, the lack of capacity and the high cost of transaction. Ahuja, who started life as a Field Officer for an NGO driven microfinance program has the answers – answers which prompted him to start his own micro finance company with an entirely different set of paradigms than the one he was first coached in.

Vikram Akula talks the language of business – of generating capital by earning profits for investors, of not being content with a couple of thousands of clients, but in terms of millions of customers as any good sized business would have and in terns of using automation and technology to manage the high cost of several tiny sized transactions. He is currently doing a pilot using mobile phone technology to manage transactions. The penetration of mobile phones among SKS’s clients is adequate enough for Vikram Akula for it to be a viable option.

Does speaking the language mean that a microfinance institution has to forsake its social obligations? Not so. Shikhar Development Services is a newly formed microfinance entity that is trying to combine sound business practices with socially relevant innovative projects. Working in an urban environment with its own particular challenges, they recently conducted a survey which revealed that many parents with school going children had a significant cash outflow in the months of April – May when the school academic year started. Often the parents would not have the cash necessary to make the pay out and the child would drop out of school. Appalled at the finding, the company is now looking at the feasibility of developing a loan product that would enable parents to meet this predictable yet unaffordable financial need.

MFIs might have entered the picture with the aim to bank with the “unbankable” and often received societal support because they were perceived as removing the scourge of the money lenders. But today they attract a fair bit of criticism too and many feel that some microfinance institutions are blurring the line between constructive microfinance and exploitative money lending. There is also criticism that easy access to credit doesn’t seem to have made any perceptible change in the lifestyle and livelihoods of the rural poor and that at the cost of the poor a large number of MFIs have benefited; banks have found a convenient route to increase lending; and corporations have got a growing consumer market to target.

As more and more microfinance institutions enter the market, they would need to be ready to respond to such criticism and innovations and social responsiveness would become more and more necessary, both to compete and to stay socially relevant. Unlike the typical banks – brick and mortar structures where customers have to visit to access products; micro finance institutions have people on the ground close to their client base to listen, reflect and constantly innovate; a luxury that the typical banking institution does not have. Compared to Bangladesh, where the market as well as the clientèle has become more discerning; India is a relatively nascent market. Many will be waiting to watch to see if MFIs become hand maidens to established commercial banks working towards “financial inclusiveness” or manage to retain their independence and their soul.