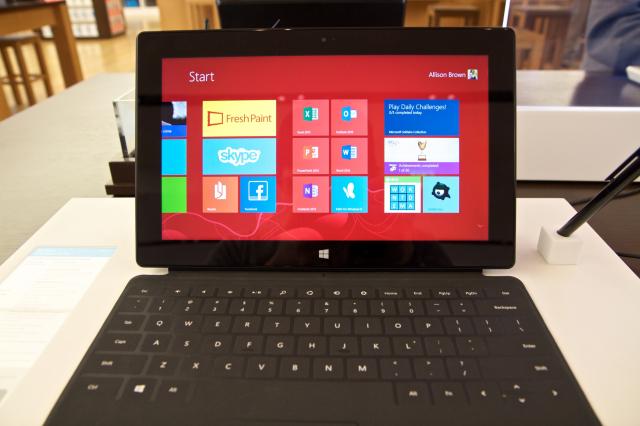 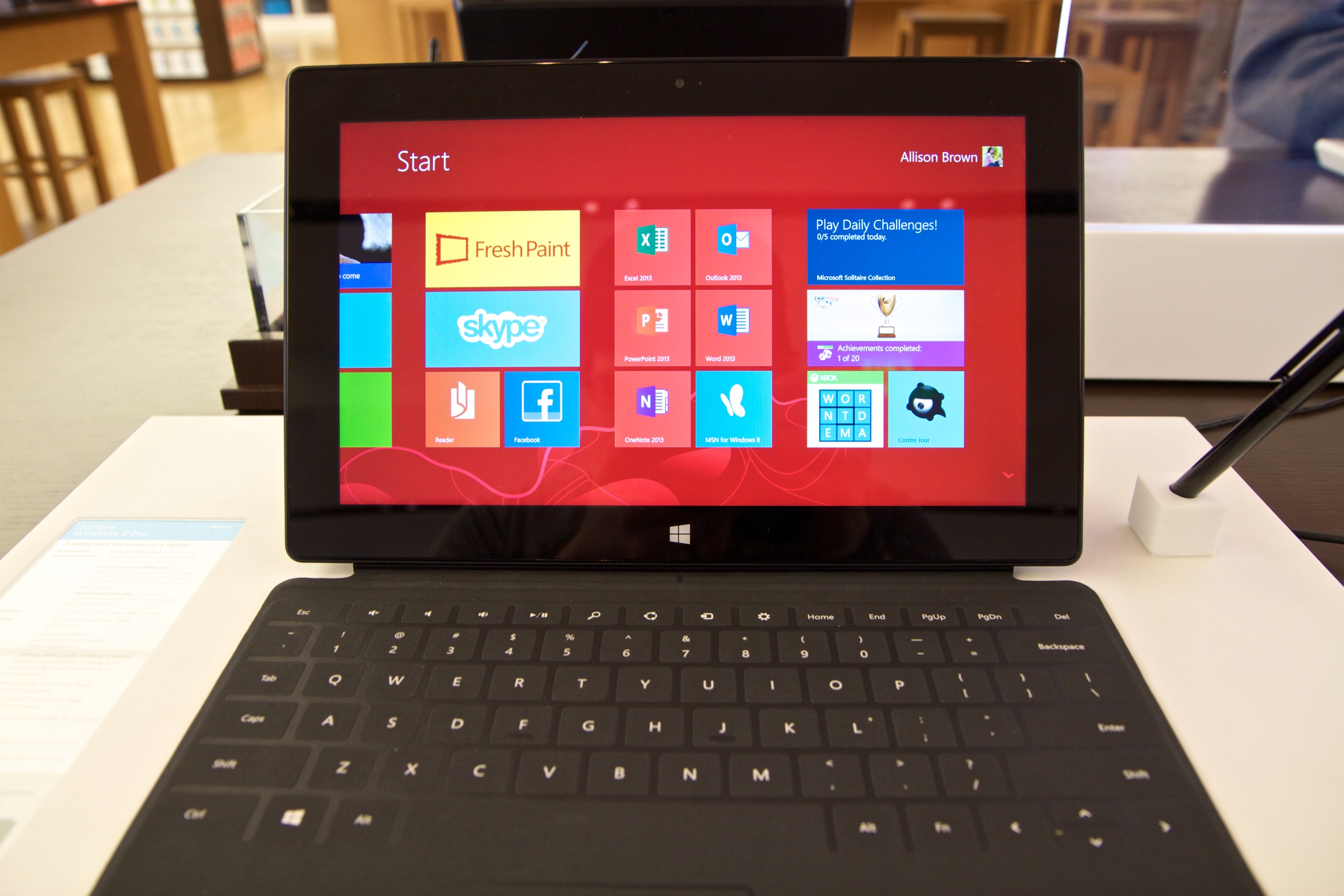 The Microsoft Surface Pro is releasing this weekend (Feburary 9th, 2013) in the United States and Canada at Microsoft stores, Best Buy, Staples, and online. Starting at $899, the Surface Pro boasts a Intel Core i5 processor  and a 1080p display. These provide both a boost in performance/speed and the ability to run legacy Windows apps. But does the high price for the relative lack of storage and battery life mean this tablet is DOA? I went hands on at the local Microsoft Store to find out. 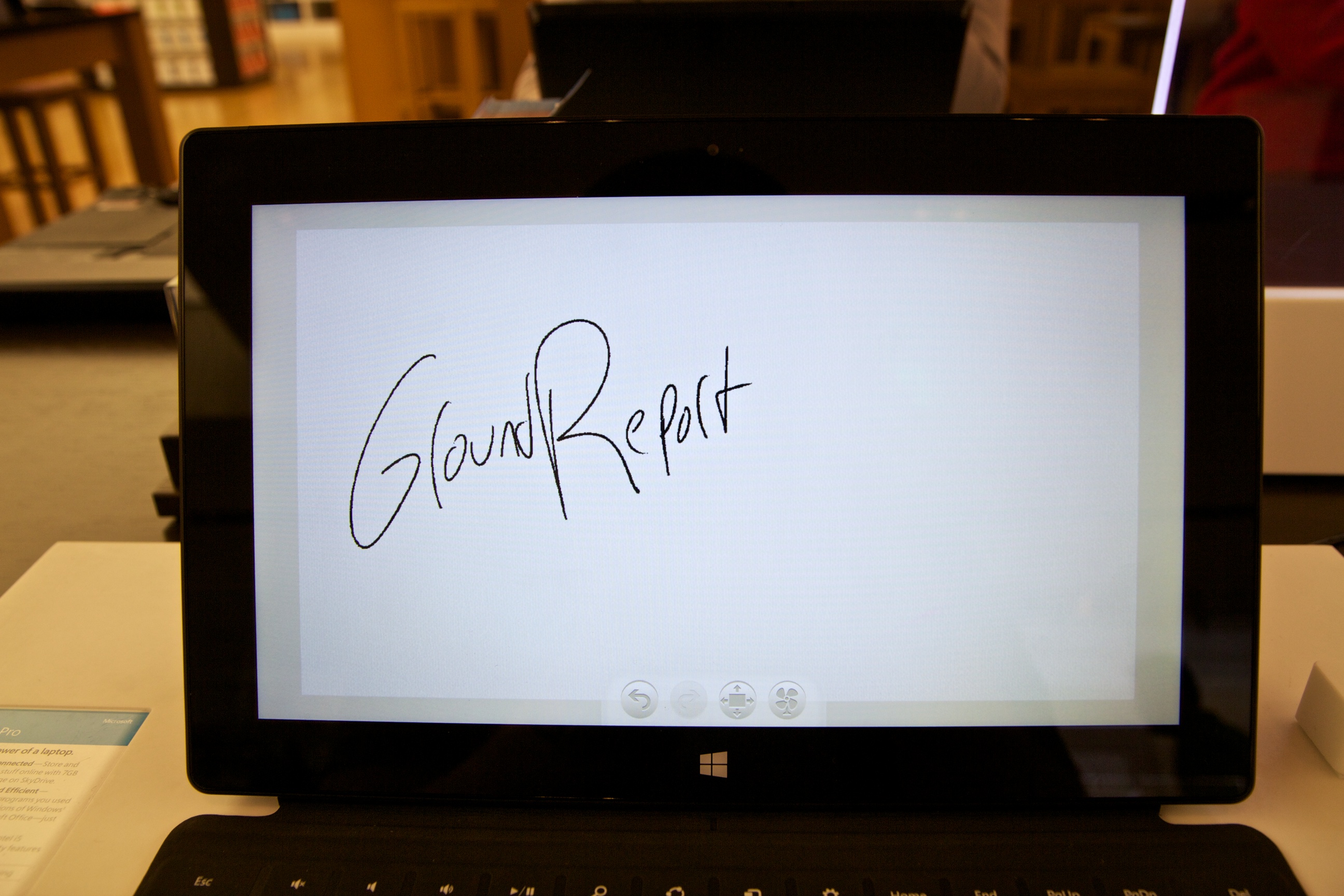 The first thing you notice about the Surface is the screen. It’s crisper and brighter than the Surface RT screen (which is 1366×768 opposed to the Pro’s 1920×1080 screen). The next thing you notice is the heft of the machine when you pick it up. The Surface Pro weighs two pounds, which looks downright portly next to the iPad (4th Generation) which tips the scales at 1.46 pounds. The VaporMg casing has a nice feel in the hand but it’s not much different than the aluminum back on the Apple iPad. However, the Surface is one of the few Windows 8 tablets that have a (basically) all metal construction.

Once you start using the Surface, it’s clear that the roots for the device lay in Windows. The Windows 8 OS, while novel looking, often spits you out to a familiar desktop looking environment when you fire up apps such as Microsoft Explorer or Word. The Surface Pro comes with a built in Wacom digitizer and pen which offers surprising accurate handwriting recognition. Like the Surface RT, you can pair your Surface with a magnetic cover that offers a keyboard (either keys or a touch surface). It’s an innovative concept that works fairly well. Having several options for input (onscreen keyboard, handwriting, touch cover, bluetooth keyboard) is a welcome addition.

When it comes to speed, the Pro is no slouch and it shows with 4GBs of RAM paired with the Intel Core i5 processor (The iPad is rumored to have 1.5GB as part of the A6X SoC). With this power comes the sacrifice of battery life. Both the Pro and the iPad have 42 Wh batteries, but the Pro only manages 5 hours while the iPad is almost double that in battery life. The main problem with that? The charger for the Pro is a 48W brick which is normally used for laptops. Unless you have a HyperMac Macbook capable battery backup, you won’t be able to charge this remotely. This is a battery life of a laptop- which would be ok … if it was a laptop. Consumers expect more battery life out of a tablet.

The other chief complaint I have isn’t the lack of apps (even though that is a sticking point). It’s Microsoft’s weird obsession to make the entire OS horizontal scrolling. I understand they want to make a statement with the new OS, but from a UX standpoint it’s extremely jarring and uncomfortable. Even in portrait mode the only option is horizontal scrolling which wastes valuable screen space with awkward formatting. This means without the kickstand, you basically have to use two hands to operate the device (with Flipboard on the iPad I can operate with one hand). Ever try to use a mouse to scroll horizontally? It’s even worse that way (just look how a typical mouse is built).

I really wanted to love the Surface Pro as I thought it had a ton of promise. However, Microsoft missing both the price point ($899 is too high for what it is) and several key features (storage space, battery life, and weight) means that this product won’t be the slam dunk that Microsoft hoped it would be. It won’t be a total failure, as the enterprise market has plenty of demand for a tablet like this. But just like RIM showed us, ignoring the consumer market provides it’s own set of large risks to deal with. Microsoft’s success depends largely on two things: upgraded models on a yearly(ish) cycle and solid legacy support for the first generation. It’s not the best way to compete but they don’t really have a choice.