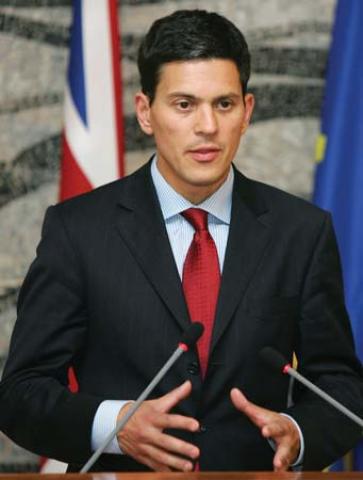 New Delhi: The British Foreign Secretary, David Miliband said that durable peace could not be achieved without resolving the lingering issues like Kashmir.

Indian Foreign Minister, Pranab Mukherjee, told the media that Kashmir is India’s internal issue and India would not tolerate any intervention or mediation.

Indian Prime Minister, Manmohan Sigh told that Kashmir is India’s jugular vein and Indian would never withdraw from its right over Kashmir, in addition, he again alleged Pakistan of the epicenter of terrorism.

The people of Kashmir have been coping with the Indian atrocities for more than 6 decades and India has put some 7, 00, 000 troops in Indian held Kashmir.

However, the elections are held just to distract the attention of the world community and India always threw the UN resolutions of plebiscite into the trash bin in past.

Pakistan has sent 20-member peace-delegation to India today across Wahga border, headed by Asma Jehangir, Human Rights Commission Pakistan; moreover, there are Senators, Journalists and Artistes in the delegation.

The delegation is to change the mindset of the Indian officials, politicians, media people and even common Indians that the war is not in favor of both countries and peace is the only solution.

Pakistan is a peaceful country and it does not support terrorism or any extremist elements.

Filed under: Politics, World
Share Tweet Pin G Plus Email
previous article: Taliban NO: 3 commander Omer Khalid with 23 others killed in north-western Pakistan
next article: Who are the racist?