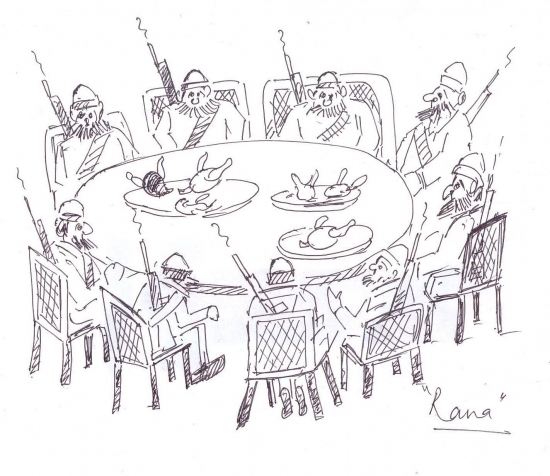 Jammu, Poonch | May 6—Amidst the clamour for demilitarization and reduction of troops in the state, the militant outfits and their mentors across the border have decided to reinvigorate the rank and file in order to give a fillip to the terror activities.

In order to take advantage of the movement and relocation of troops in Poonch district, an executive meeting of militant commanders was held on April 30 at Sheen Darrah, to discuss new strategies and operational matters.

In this meeting, new appointments were also made to ensure that communication with local people is improved and they are taken into confidence. Seventeen terrorists which include locals as well as foreigners were made responsible for the entire Poonch district and adjoining Mendhar and their area of operation was also demarcated.

As per highly placed sources, Abu Asif, Saiful Rehman, Mohd Mushtaq and Abdul Ghani son of Mohd Hussain, all belonging to Lashkar-e-Toiba have been assigned the area of Sheen Darrah, Kalai, Khanetar and Manjari.

These men will be responsible for receiving operatives from , providing them shelter and helping them in carrying out the actual operations against the security forces.

According to sources, Inter Services Intelligence of Pakistan has asked the new operators to tap the unrest among the people which has been caused by reduction of troops as well as some incidents of high handedness by the Army men.

These men have been assigned the task of tapping new youth and recruiting them to get training across the border. Infact, the top commanders of the terrorist outfits have decided to work in close coordination to ensure that youth of the area join the militant ranks in large numbers.

Another important task which has been assigned to this new team is to take action against Village Defence Committees and break the confidence of the local people.

In a startling revelation it was also discovered  that a team of locals has also been constituted as recruiting board to identify the local youth, who can be lured successfully into anti-national activities. This team will move with the top militant commanders of the area and motivate the local youth for crossing the border.

Here, it must be mentioned that people living in and around Hill Kaka particularly the VDC members have repeatedly expressed apprehensions of retribution by the terrorist groups.

The residents of these areas had helped the Indian Army during the Operation Sarp Vinash in 2003.