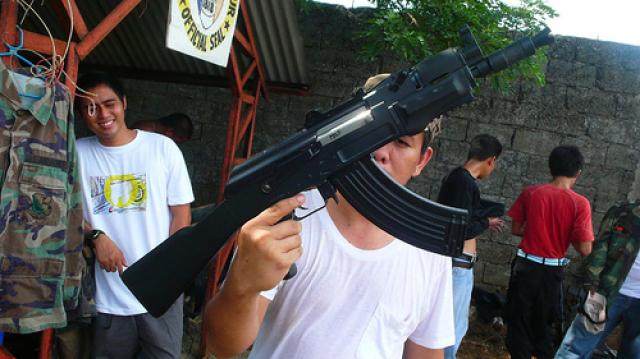 Enlisting in the military or police in the Philippines is like passing through the hole of a needle. Unlike in the west, new applicants experience so much difficulties getting in, no matter how interested they are to join the force.

Sometimes, this sad experience among applicants is misconstrued as a means to discourage them from getting into the force. Some insiders said that there are two valid reasons why? First is that there is no budget for new recruits and the other is the "whom-you-know" attitude, which is a common practice in the military recruitment system.

In the past, most of the recruits would come from poor families in the provinces. After graduating from high school, they end up joining the military or the police because their parents lack money to support them through college. While others simply wanted to earn money at once, rather than going to college. This is not true anymore these days.

Under the present set up, the defense department has upgraded the educational qualifications of new recruits before theycould be admitted to the military. While in the police force, no recruit will be taken in unless he has a bonafide degree from a recognized college or university in the Philippines. Taken for granted that the new recruits have already passed the tests, comprising of written and medical examinations. Another big ordeal is the waiting period. Like the procedure in applying for overseas employment, new recruits never know when they will be called to wear their uniforms and start serving the military service.

All these things are contrary to what is happening in America. In fact, the U.S. military or even the police in almost all the states are even encouraging interested applicants to apply through a series of advertisements.

This is not to mention their intensified recruitment in colleges and university campuses across the U.S., which already elicited howls of protests from parents and civic-oriented groups.

In the Philippines, it is not advertised. An interested applicant has to use his radar or initiative if he wanted to join the force. He can do this through referral or by personally inquiring at the three major service of commands across the country. Nothing else. In the Philippine Military Academy, it is different as the schedule of examination for interested applicants are advertised in the newspapers and posted in all camps and college campuses thoughout the Philippines.