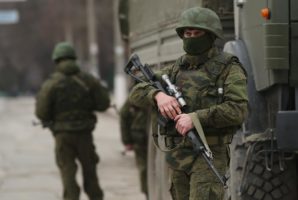 On March 11, 2014 the Ambassador from Ukraine to the United States, Ambassador Motsyk, wrote a letter to Members of Congress.

The letter reads as follows:

For the past couple of months, Ukraine has been in the world’s headlines. The whole world saw the determination of hundreds of thousands of Ukrainians who took to the streets to stand for a better life–for freedom, democracy, and the end of blatant corruption that stifled our country for far too long. Yet the Yanukovych regime tried to silence the protesters with guns. Peaceful and unarmed demonstrators were met by special forces with snipers who shot dead almost a hundred people and wounded hundreds more.

In an attempt to prevent further bloodshed and resolve the crisis, on February 21, 2014, leaders of the opposition Vitali Klychko, Oleh Tyahnybok, and Arsenii Yatsenyuk on one side, and the corrupt regime of Viktor Yanukovych on the other, signed an agreement that had been negotiated with the help of foreign ministers of Poland, Germany, and France. Russia’s Special Envoy, Vladimir Lukin, was present, but refused to sign it. Therefore, the suggestion by the Russian side that the opposition failed to implement the agreement is groundless.

The agreement called for an end of violence, restoration of the Ukrainian Constitution of 2004 and early presidential elections. However, on February 22, 2014, President Viktor Yanukovych fled the capitol and de facto removed himself from his constitutional authority. Therefore, on February 27, 2014, the Verkhovna Rada of Ukraine was the only legitimate authority in Ukraine at that time, given the resignation of the government and the President’s self-removal from exercising his functions, and restored the 2004 Constitution (approved by 386 votes out of 450), recognized that Viktor Yanukovych removed himself from his constitutional duties through unconstitutional means by 386 votes, including 140 votes from the pro-Yanukovych Party of Regions, and set the early elections of the President of Ukraine on May 25, 2014 (328 votes).

That was 328, a vast majority of members of their Congress, of their Rada, voted for that.

The Verkhovna Rada is their Congress.

The Rada elected its new speaker, Mr. Oleksandr Turchynov (by 288 votes), who acts as the President of Ukraine until the elections, and appointed Mr. Yatsenyuk as the Prime Minister (by 371 votes). These actions were made in full compliance with Ukrainian laws.

That is over three-quarters of the membership. As the American people listen to what is happening there, you are watching a country trying to hold its government together. It was like at the beginning of our Republic when we weren’t quite sure exactly how it was all going to be put together, but we were trying mightily to create a republic. However, even after the Ukrainian Congress did that, Russia did not recognize these changes and considers the former President, Viktor Yanukovych, its legitimate President, despite the votes of the Parliament, the highest standing body in the Nation of Ukraine.

Producing a piece of paper purporting to be Mr. Yanukovych’s letter asking Mr. Putin to send Russian trips to Ukraine, the Federation Council of Russia, upon Mr. Putin’s request, approved such a decision.

Some of us who are old enough to remember, remember what it was like living with the Soviet Union, a Soviet

Now, the former President of Ukraine, Mr. Yanukovych, who stole from his own people–those are my words, not the Ambassador’s–

Mr. Yanukovych is no longer the President of Ukraine, particularly after his escape from Kyiv on February 22, 2014. Therefore, none of his statements have any significance under either Ukrainian or international law. But in any way, even if the legitimate President of Ukraine called upon a foreign country to intervene with its armed forces in Ukraine, such a statement would also be worth nothing, because under the Constitution of Ukraine, Article 85, only the Verkhovna Rada of Ukraine, its Congress, can approve decisions on admitting units of armed forces of other states to the territory of Ukraine. The Rada clearly stated it had not made any such decisions.

Seeing that Ukraine is determined to pursue its European course, Russia, under the completely trumped up pretext, invaded Crimea with its armed forces.

The Russian forces are seeking to establish complete control over Ukraine’s military facilities in Crimea, trying to block and disarm Ukrainian military garrisons and border guard bases, blocking airports and ships. The Russian troops and armored vehicles are moving uncontrollably around Crimea, one of Ukraine’s states, and numerous Russian military planes and helicopters violated Ukrainian airspace.

Russia’s power far outweighs Ukraine, which is nearly defenseless facing this massive force, and yet, Ukrainian soldiers have hunkered down in army bases, in air control stations, trying to stand up as they are surrounded; what courage. What courage.

By countless provocations, Russian military is seeking to instigate an armed conflict and replicate in Ukraine the Abkhazia and South Ossetia scenario. However, Ukrainian servicemen act with utmost restraint and don’t react to such provocations, but there’s a threat that Russia may engineer provocations against its own troops, and blame them on Ukraine. Don’t forget, Russia’s President was head of the KGB, their secret police. He knows these techniques well.

There is also an ongoing accumulation of Russian equipment on the Russian territory in close proximity to the border of Ukraine in the Kharkiv, Luhansk, Donetsk and Chernihiv oblasts.

What does that mean?

These actions may indicate preparedness of the Russian side for possible intervention into the Ukrainian territory across the land border.

The military intervention is accompanied by a huge outburst of fabrications. I can assure you that Russian-speaking citizens of Ukraine enjoy the same rights and freedoms as other citizens of my country. Nobody has ever forbidden, forbids, or will forbid the use of the Russian language, as the Russian propaganda tries to demonstrate.

As of today, there is no proof of any violations of Russian minority rights in Ukraine; there were no appeals to the relevant Ukrainian authorities, neither from those allegedly affected nor from Russia’s officials. In accordance with the Memorandum of Understanding between the Parliamentary Commissioner on Human Rights of Ukraine and the Ombudsman of the Russian Federation in case of such appeals to the Russian side, they are transferred to the Ukrainian Ombudsman.

The actions by the Russian Federation constitute an act of aggression against the state of Ukraine. Russian Federation brutally violated the basic principles of Charter of the United Nations obliging all member states to refrain from the threat or use of force against the territorial integrity or political independence of any state.

What has happened is serious.

Ukraine in the strongest possible terms protested such actions, but Russia officially rejected Ukrainian proposals to hold immediate bilateral consultation (under article 7 of the Treaty on Friendship, Cooperation, and Partnership between Ukraine and the Russian Federation of 1997).

Russia’s actions pose a serious threat not only to the sovereignty and territorial integrity of Ukraine, but also to the peace and stability in the whole region. Moreover, Russian’s action provoke a disbalance in the international security system, and can lead to violations of the regime of international nuclear nonproliferation on a global scale.

When in 1994, Ukraine became a party to the Nonproliferation Treaty and voluntarily surrendered the third-largest nuclear arsenal in the world, it did so exclusively under certain conditions. These conditions envisaged granting security assurances to Ukraine by the five nuclear states. On December 5, 1994, the United States, the Russian Federation, and the United Kingdom signed the Budapest Memorandum on Security Assurances to Ukraine. The French Republic and the People’s Republic of China support the memorandum by signing separate declarations.

Ukraine has thoroughly implemented its commitments under the Nonproliferation Treaty and has taken and fulfilled additional obligations by getting rid of all of its stockpiles of highly enriched uranium.

Today, we witness the situation when the Russian Federation attempts to undermine the NPT regime not only by violating the Budapest Memorandum, but also by violating the Nonproliferation Treaty, which clearly states in its preamble that “States must refrain in their international relations from the threat or use of force against the territorial integrity or political independence of any state, or in any other manner.”

Nonadherence by one guarantor state–the Russian Federation–to its commitments under the Budapest Memorandum by the military invasion in Ukraine creates a situation when the threshold states may consider international legal instruments insufficient to ensure security, territorial integrity and inviolability of their borders.

We rely on the commitments contained in the Budapest Memorandum of 1994 and the Charter on a Distinctive Partnership between NATO in Ukraine, as well as the U.S.-Ukraine Charter on Strategic Partnership and other bilateral documents.

Ukraine is asking the world community to pay attention.

We need help from the guarantor states, the United Nations, NATO, the Organization for Security and Cooperation in Europe–

Who, by the way, have been denied access on repeated attempts to enter Crimea unarmed to observe, Russia has denied them entry.

The European Union, all civilized nations to protect our sovereignty and territorial integrity by all available means and to prevent a war which would shatter peace in Europe and will have grave and irrevocable consequences for peace and security on a global scale.

The aggression must be stopped, and we rely on the strong and unified position of the global community.

Crimea is an inalienable part of Ukraine, with citizens of all ethnic backgrounds.

All issues should be resolved through negotiations. There is no alternative to a peaceful and diplomatic solution of the crisis. We hope that wisdom will prevail.

We need America’s help, and we count on it.

Ambassador of Ukraine to the United States