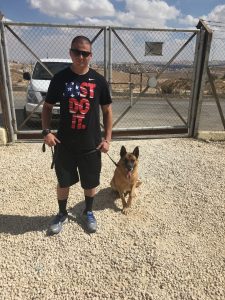 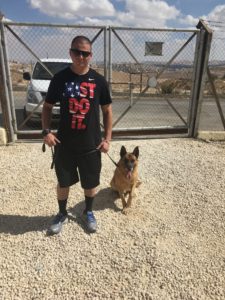 While many people are familiar with the many U.S. soldiers serving in the Middle East, they are not aware of the dogs that often serve alongside them. Some of the dogs serve in official positions helping the military effort, while others are strays that the soldiers become attached to. Rather than having to leave those dogs behind, two U.S. soldiers will be adopting the dogs they have formed bonds with. The dogs will be transported from the military zone in the Middle East where they are stationed, and will be waiting for them upon their return back to the States, thanks to the work of Guardians of Rescue.

“We realize how important these dogs are to the health and well being of the soldiers who have been caring for them and working alongside of them,” explains Robert Misseri, president of Guardians of Rescue. “We are excited that we will be keeping these two dogs with the men who mean so much to them and vice versa. It’s a small gesture that we do for our soldiers that has a big impact.”

The two soldiers, both in the Army, who will be adopting the dogs are Sergeant Christian Cox and Specialist Michael Fenton. They contacted Guardians of Rescue, asking for assistance to help them get the dogs safely back to the U.S. Cox will be adopting Ghost, a stray dog that he has formed a bond with, while Fenton will be adopting Amigo, a bomb detection dog that was just retired of his duties.

The plans are currently under way for Guardians of Rescue to fly to where the two soldiers are stationed in the Middle East, and bring the two dogs, Amigo and Ghost, to Pennsylvania, where they will be placed with the soldiers’ families and wait for the return of the soldiers themselves. Both dogs are currently being cared for by the soldiers, and the organization is working as quickly as possible to bring them safely to the U.S. In addition, Guardians of Rescue is sending one of their retired military members to escort and ensure the dogs have safe passage to America.

“We are very honored to be helping the military and these dogs,” adds Misseri. “But we need your support to accomplish our goal of raising $10,000 – which is the funds required to get the dogs out of the Middle East and into their forever homes in America.”

Guardians of Rescue provides assistance to animals out on the streets, helping to rescue them, provide medical care, food and shelter, and find foster-home placements.. They are also instrumental in helping military members with their pets, and to provide service dogs to veterans suffering from post traumatic stress disorder. To learn more, get involved, or to make a donation to support the Guardians of Rescue, log onto www.guardiansofrescue.org.

Filed under: Military, News
Share Tweet Pin G Plus Email
previous article: Tips on How to Be More Financially Responsible
next article: NHS-Funded Courses to Break the Cycle of Medical Miscommunication