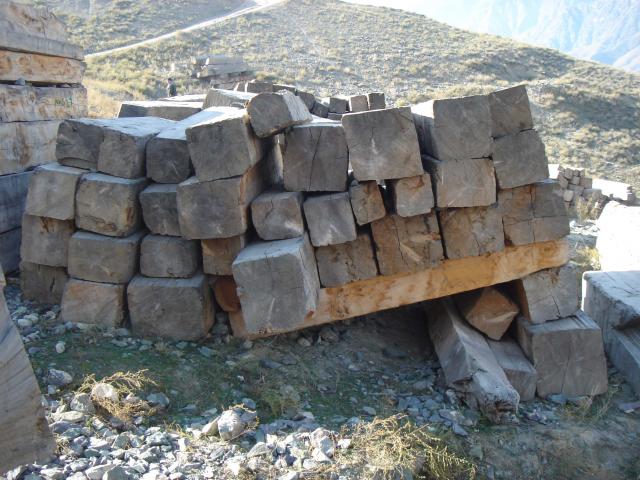 CHITRAL: Forest department auctioned Deodar (infrastructure) timber of million rupees at Drosh. These trunks have been seized by forest staff when local people were trying to smuggle it outside. But these trunks were forfeited (seized) in different forest check posts and were collected at Forest rest house Drosh. During open auction some 25 lots consisting on 9312 cubic feet timber were sale out @ 1420 per feet as a result million of rupees were deposited in government exchequers. Auction was completed transparently under supervision of Sub Divisional Forest Officer Fazal Khaliq Mehtarjo. Hence some contractors belongs to  Dir and down districts demanded for banning of illegal cutting of forest in Chitral because due to brutality cutting not only environment badly affecting but it also causing for tremendous flood and disaster.   Some old and decomposed trunks of Deodar also seen on the spot which is damaging. At present 9312 feet cubic feet trunk were auctioned hence thousands of feet Timber/trunk are still lying in Drosh forest rest house which would be auctioned later on. Hence due to interference of this scribe the contractors disappointed and not success in their plan for ring to decrease rate of timber in auction causing for heavy loss for government.
G.H. Farooqi PO Box No. 50 GPO Chitral or Bank Islami Main Branch Chitral
Telephone NO 0092 3025989602, 03469002167, 03337069572, 03159698446, 0943-320737, 0943-316052, 0943-414418
Email: gulhamad@gmail.com
Filed under: Media & Tech, World
Share Tweet Pin G Plus Email
previous article: OHRC-Nepal Extension denied in Nepal
next article: Global warming signs are visible in the Himalayan region