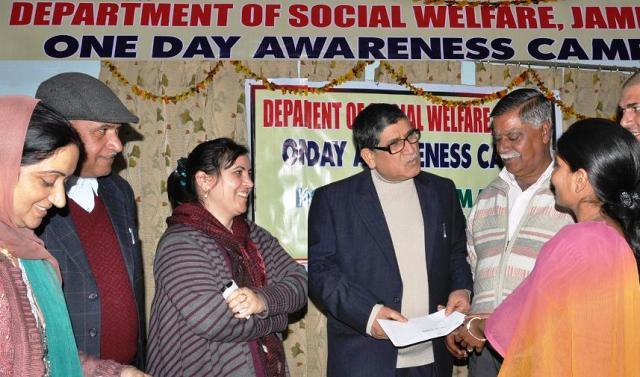 The camp was organized by Social Welfare Department, .

Speaking on the occasion, Mr Lone appreciated the efforts initiated by the department for making people aware about the welfare schemes being run by the Government in the State. He Asked authorities of the social welfare department to hold such awareness camps in other parts of the state so that more people become aware and come forward for taking the benefits of the schemes.

Speaker said that social welfare department has a vital role in mitigating the sufferings of the people living below poverty line. “ Service to people is a worship”  said the speaker, adding  that  need is to enhance the honorarium of Anganwari workers and helpers. Mr lone said the Anganwari workers and helpers have direct contact with the locals of their respective areas and emphasized upon them to expand the ambit of their activities so that more and more needy persons are brought under the welfare schemes of the department.

Ms Sakina said that 28000 Anganwari centres are working in the state, adding the centre has been approached for sectioning of more 6500 centres to bring all the areas under integrated child development scheme. She said a proposal for creating basic infrastructure for Anganwari Centres, stands already submitted to the Central Government for approval.

The Minister said Government is trying to ensure timely payment of pension among the beneficiaries, adding a lot has been achieved in this direction. She asked social welfare functionaries to work with dedication and honestly and go to people, seek and address their problems.

The Minister said a survey would be conducted across the state through Anganwari centres to ascertain the exact population of physically challenged in the State so that Centre would be approached for financial assistance for them accordingly. She said presently department is paying monthly pension to 1.50 lac such beneficiaries.

A cultural programme was also presented on the occasion by the Anganwari workers and helpers besides presentation of a short drama highlighting the ignorance of women about girl child foeticides and its adverse effects on the health of mother.