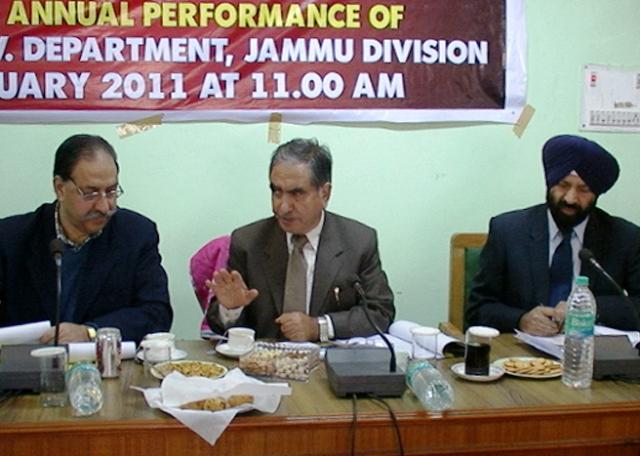 , January 29 (Scoop News) – Reiterating that sericulture is an important income generating sector in the State providing succor to poor within a minimum period, Minister for Agriculture,  Gh. Hassan Mir has stressed for increasing the number of rearers across the state by creating awareness about the cash crop.

The Minister was speaking at provincial review meeting of the department in the office complex of the Department here this morning. He said J&K has a vast potential in this heritage sector and directed the district heads to utilize all resources to motivate the people to opt it as an economic activity. He asked them to hold rearing demonstration activity in every area for increasing the rearers.

Mir Said that our thrust area should be to provide all sort of assistance to the rearers at their door steps for which Government has launched different schemes for their encouragement and boosting production. He said that every year lakhs of mulberry saplings are being planted to cover more and more area under Sericulture extension programme which increases our leafage production, "So the cocoon production should also increase with the same pace".  He said that all the Mulberry farms be utilized for contract rearing for the better leafage utilization in these farms would uplift the economy of the respective areas.

For introducing latest techniques applied at the Global level, The Minister directed for sending more and more progressive rearers on departmental tours outside State so that they get latest technical Knowhow. He said that "we have also thrust to produce local quality disease free seeds to cater  to the needs of desiring rearers of the State to increase production".

The Minister directed the Director Sericulture to identify those Nurseries needs irrigation facilities so that they would be provided bore wells, lift irrigation, water harvesting tanks under RKVY scheme.

The Minister was informed that during this year 5065 Mt Cocoons were produced against 4084 MT in 2008-09 and the rearers earn  Rs. 7.12 crore in 2010-11  against Rs 2.90crore in 2008-09.He was further informed That the average price rate remains this year Rs410 per kg. The multiple cropping was this year successfully introduced in the province which shows positive results, he was informed.