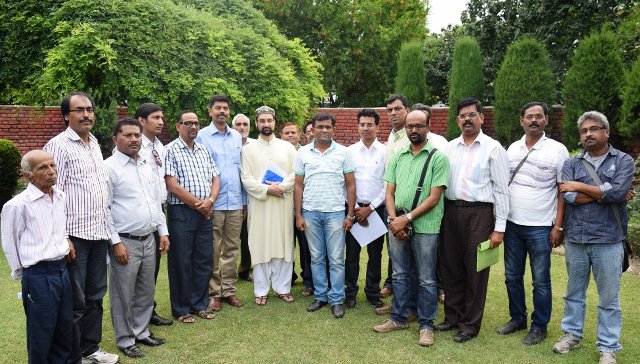 The journalists representing prominent media organizations like PTI, HT, and others were part of the delegation.

During his meet with the journalists, Mirwaiz stressed upon the visiting delegates to give prominent space and help in weeding out the negative propaganda promoted by the state among the Indian people regarding Kashmir in their respective media outlets.

He told them Kashmir was neither a regional issue, nor a religious one, adding, it was a political and human issue which should be addressed in that particular context.

Mirwaiz said that it was extremely unfortunate that government was spreading misleading information among people regarding Kashmir dispute and presenting it as a Pakistan sponsored problem.

In reality, he told the visiting journalists that Kashmir issue was a living reality for which people have made several offerings.

APHC leader suggested journalists to meet common people in Kashmir to know their opinion, adding, they should try hard to know the realities attached to Kashmir issue and present those very facets them before the people of India as they are.

Mirwaiz stated that change in government or faces have no bearing on Kashmir dispute.

He said that the need of the hour was that emotions and aspirations of Kashmiris should be considered and a realistic thinking and approach should be adopted to move forward and initiate a meaningful dialogue between India, Pakistan and Kashmiris to solve the vexed dispute.

Arguing that Kashmiris were not against Indian people, Mirwaiz said that they wanted economic progress in the region, adding, for that to happen, it was imperative to solve the Kashmir issue- a constant source of tension in South Asia.

APHC leader further said that civil rights of Kashmiri people have been usurped by the state.

He said that religious, political and social activities of leaders have been restricted.

He appealed the visiting journalists to discharge the duties professionally by highlighting the human and political dimensions of the Kashmir problem.
READS MORE http://scoopnews.in/det.aspx?q=39074