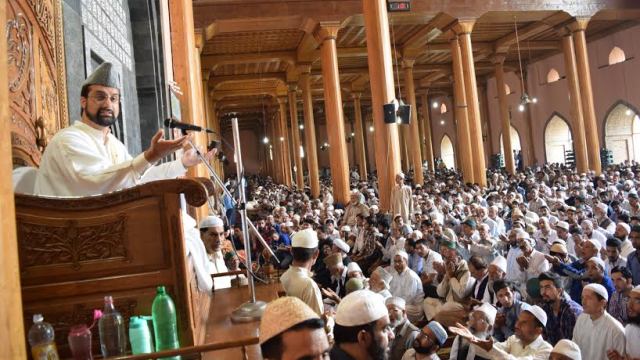 Addressing his weekly Friday congregation at historic Jamia Masjid, Mirwaiz said that the people were subjected to immense hardships due to the devastating floods.

He said that even though efforts were on to bring back life on track, the magnitude of the disaster is such that it would be a long time and huge effort before things could normalize.

“The claims of New Delhi and the state government that all help and assistance in terms of relief and rehabilitation to the affected people is being provided,is incorrect and far from the truth”, APHC leader argued.

“Although a month has passed since the floods, there is very little presence of state machinery on the ground”, he said.

Mirwaiz said that basic food items like rice and wheat was not available to people or if it was, it is not being distributed fairly.

Mirwaiz said that it is unfortunate that the Government of India has as yet not allowed international aid to come into the valley which greatly needs help from all quarters.

He said that even though Kashmiri expats residing in different countries around the globe have contacted Indian embassy for allowing aid to reach their brethren in Kashmir, but GOI condition of allowing it only if it is send though Prime Ministers relief fund,is unfortunate.

Mirwaiz announced that in view of complaints recieved from hundreds of affected people that their was favouritism and discrimination in the distribution of whatever relief was being provided by the government,Hurriyat leader has decided to constitute a public grevience cell,where complaints in this regard can be registered.

Details of complaint centres will be made public soon. The cell will also act as a watchdog to ensure that fair practices are followed by the authorities in the rehabilitation of affected people.

If any discrepancies were found in this regard it will be exposed through media.

Mirwaiz said that complaints have also been received from some quarters that flood affected goods were being repackaged and sold by shopkeepers in the markets,which is highly condemnable.

He said complaints of this kind will also be entertained and looked into by the cell.

Mirwaiz also announced that Eid-ul-Adha Nimaaz would be offered at historic Idd Gah,Srinagar on Monday at 10 am and the sermon would start at 9 am sharp.