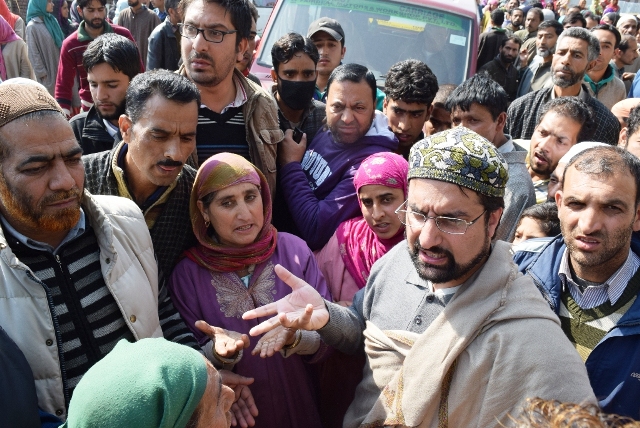 Srinagar, October 30, (Scoop News)_ Terming the rehabilitation of thousands of families whose houses and property got damaged due to destructive floods as a major challenge before Kashmiris, APHC leader, Mirwaiz Umar Farooq, Thursday said the way Kashmiris came forward during the recent floods to help their brethren, similar courage and zeal was needed to rebuild Kashmir.

He distributed relief material among the victims on behalf of Dar-ul-Khair which contains blankets, eatables and other essential material.

Consoling with the flood victims, Mirwaiz expressed his concern over the damage incurred to orchards, paddy fields, and residential as well as commercial buildingd due to the ravaging floods, Mirwaiz said that despite the beginning of winter, the government has not started any substantial relief and rehabilitation programme in the flood affected areas.

He expressed his regret over irresponsible behavior on part of the state.

Mirwaiz said that thousands of residents were staying in make shift tents and spending their nights under the cold and rain.

He condemned the state for playing discriminatory politics while distributing the relief material.

Terming the restrictions on international aid into Kashmir by the Government of India as cheap politics reflecting a narrow outlook towards the grave human problem, Mirwaiz stated that Dar-ul-Khair would utilize its all limited resources to rehabilitate the flood victims.

Upon the arrival, the residents of Pulwama gave a warm welcome to Mirwaiz.

Hurriyat leaders Bashir Ahmad Andrabi and AAC Pulwama Nasir Andrabi including scores of other people were present on the occasion.