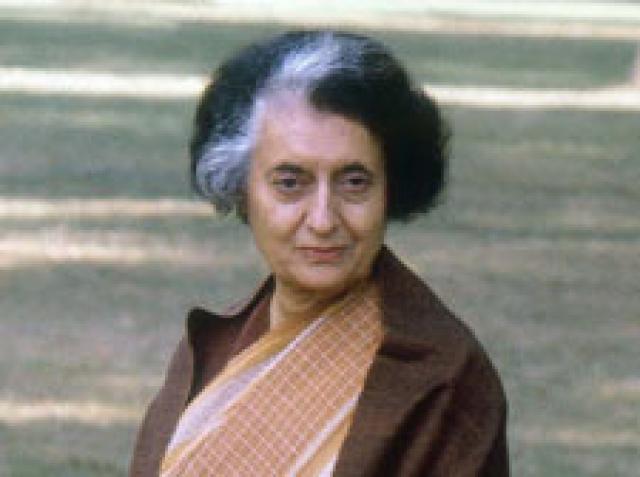 In the subcontinental mythology of power, she is still the Awesome One. Mother Boundless. Angry Goddess. Empress of Enigma. Matron Saint of Paranoia…Indira Gandhi continues to be reborn in the memory of a nation as avatars of affection, admiration, adoration and fear.

Twenty-five years after her assassination on the morning of October 31, we still miss her, and not because of the simulated nostalgia of those who claim copyright over her political legacy in this season of commemorative frenzy. Is it then a measure of her exceptionalism or a reflection of the pathology of the current leadership in politics?

Her journey from the cloistered privileges of Anand Bhavan in Allahabad to the absolute power of 1 Safdarjung Road in Delhi to the collective consciousness of India-or her transformation from the frail, lonely "Indu boy" to the Intimate Indira of the masses-essays the passions and mystique of power.

Words that denote the banality of power today-words like dynasty and populism-resonate differently when they appear in the narrative of her evolution. The Gandhi cult-not of loincloth-and-spinning-wheel but of starched-cotton-and-parted-hair-is arguably the most enduring legacy in hereditary politics today. It all began with her, in spite of the bloodline going back to Motilal Nehru, and she would consecrate it with her own blood.

As in every dynastic script, from the very beginning, she was told of the symbiosis between her destiny and history. The father, always a storyteller of grand sweep, wrote to her that she was born in the month of Russian revolution, in a world of "storm and trouble". Stormy it would remain till the very end but she would not be swept away. Unlike her children and grandchildren, and the daughter-in-law of course, she would not have an easy start. She had to fight and win within the party first. And those men were not in awe of her-or of her pedigree-either.

They were not as dependent or servile as the average Congressman we meet today: someone who cannot think of his political existence beyond the reassuring shadow of a Gandhi; someone who is kept alive by Our Lady of Deliverance. And the original Mrs G was not born out of the collective desperation of a wailing legion of Congressmen either. She had to be smarter than those wily old men of the Syndicate who thought she would be a pawn in their hands. She had to be ruthless.

The legend of the strong leader always begins with the story of the novice outplaying the so-called kingmakers. Indira, the archetypal strong leader, would become the political equivalent of the sacred feminine in a culture that venerates Mother Goddess, who embodies amelioration as well as annihilation. Even the poetic flourish of an Atal Bihari Vajpayee could not resist the Durga imagery as a triumphant, post-Bangladesh Indira walked into an ecstatic House.

We also know that gods and goddesses in politics are connoisseurs of kitsch, the art of playing with the mass mind. A character in a Milan Kundera novel cries out, "My enemy is not communism but kitsch", which the novelist says is the aesthetic ideal of totalitarianism. Elsewhere, from Eva Peron to Imelda Marcos to Jayalalithaa, it was the art of kitsch that made them performers of mass salvation. Mrs G’s socialist populism, quite Soviet in many aspects, was a more evolved version of kitsch on a national scale. Soon it would become cathartic for an entire people.

When the feeble ‘Indira Hatao’ infuriated her, she came out with ‘Garibi Hatao’, an empty slogan but the most seductive one. When she was the target, she made her antagonists look silly, as if targeting her was as treacherous as targeting India. In retrospect, it was an exaggerated sense of her destiny as the infallible one-as infallible as India- that brought out the totalitarian temptations of Indira.

The Emergency was the manifestation of the paranoia of the deified. She needed an enemy to further the myth of the protective goddess in the age of what her father would have called "storm and trouble". She would be humbled-or humanised. She would regain India, and finally, walk toward the waiting assassins.

Today, we get a glimpse of that starched cotton sari and brisk walk. And the new Mrs G is the most powerful politician in India, that too without being officially in power. She is winning the elections too. Then why is it that the original still concentrates the national mind? There was no middle ground for Indira, and no triangulations when action was needed. Lohia’s "dumb doll" would become the ruthless, charismatic, and unforgiving practitioner of power. India overlooked her flaws and frailties because people could never differentiate between her political interest and the larger national interest.

On the day before her assassination, she spoke at an election rally in Bhubaneswar: " I’m here today, I may not be here tomorrow. I do not care whether I live or die. I have lived a long life and I am proud that I spent the whole of my life in the service of my peopleâ€¦ and when I die, every drop of my blood will invigorate India and strengthen it."

Those were the words of a leader who believed that she had an emotional covenant with the people. She is still here today because those who are marketing her martyrdom or copying her style have not discovered the India that romanced Indira. The meek can never inherit Indira. They can only parody her.