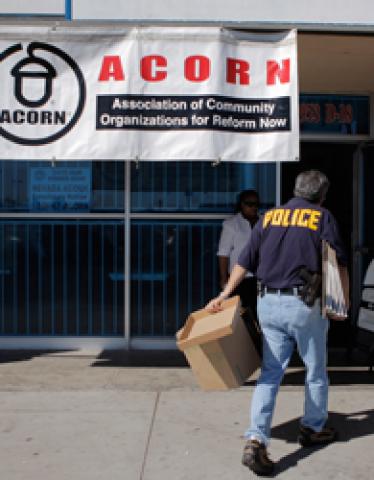 A prominent community organization that has been accused of submitting falsified or duplicate voter registration forms in Nevada and Ohio is being investigated in Missouri.

Officials in Jackson County, Mo., have joined two other states in probing the voter registration activities of the Association of Community Organizations for Reform Now.

"I don’t even know the entire scope of it because registrations are coming in so heavy," said Charlene Davis, the county’s elections board co-director, in an interview with the Associated Press. "We have identified about 100 duplicates, and probably 280 addresses that don’t exist, people who have driver’s license numbers that won’t verify or Social Security numbers that won’t verify. Some have no address at all."

The forms, she said, came from ACORN, which this week saw its Las Vegas offices raided in a voter fraud probe.

ACORN’s Midwest Director, Jess Ordower, said three weeks ago Missouri officials said there were 135 suspicious cards, but most of them were duplicates.

"They keep telling different people different things," Ordower told AP. "They gave us a list of 130, then told someone else it was 1,000."

According to AP, "He believes his group is being targeted because some politicians don’t want that many low-income people having a voice."

In Las Vegas, the office has been accused of “submitting fraudulent voter-registration forms,” AP reported. State officials said some questionable forms sought to register Tony Romo and Terrell Owens, which are also the names of football players for the Dallas Cowboys.

Bertha Lewis, ACORN’s interim chief organizer, said in a statement that her group had separated suspicious applications from others and given them to election officials for investigation, then met with state officials in July because they weren’t acting on ACORN’s information.

“ACORN pleaded with them to take our concerns about fraudulent applications seriously,” the statement said, and went on to label Tuesday’s search a “stunt.” “Today’s raid by the Secretary of State’s Office is a stunt that serves no useful purpose other than discredit our work registering Nevadans and distracting us from the important work ahead of getting every eligible voter to the polls.”

Bob Walsh, a spokesman for Nevada’s secretary of state, told the AP: “You don’t have to read too many cop novels to know that sometimes people will tell you a grain of truth to try to hide the rest of the truth. I’m certainly not suggesting that ACORN is that nefarious, but at the same time just because they handed over 50 to you doesn’t mean there aren’t 150 others out there.”

ACORN is also under investigation in Ohio, one of this year’s battleground states, where the Cuyahoga County Board of Elections is conducting an inquiry into the group’s alleged submission of fraudulent voter registration cards. According to Cleveland paper Plain Dealer, “the group has faced similar inquiries in other large Ohio counties.”

In Cuyahoga County, where Cleveland is located, “election workers flagged about 50 names on suspicious cards. The cards were to register the same names, raising the possibility that canvassers shared information when trying to make quotas,” the Plain Dealer reported.

“None of us have ever achieved perfection,” he was quoted as telling the board.

Atlantic Monthly’s Marc Ambinder gives an overview of the ACORN controversy. Among the complaints the GOP has lodged, “Republicans point to charges, many validated, of ACORN’s turning in hundreds, if not thousands, of fraudulent registrations in at least a dozen states and employing felons in states where it’s illegal to do so for voter registration purposes,” he wrote.

The group’s defenders, he says, “insist they’re non-partisan, say that the group simply wants to make sure that as many eligible voters as possible vote and contend that critics are motivated by their partisanship, and possibly by their antipathy toward poor people and black people.”

Jason Leopold of the Public Record said Republicans have targeted ACORN for some time, and that some believe voter disenfranchisement is the goal.

“No concrete evidence of systemic voter fraud in the United States has ever surfaced. Many election integrity experts believe claims of voter fraud are a ploy by Republicans to suppress minorities and poor people from voting,” Leopold wrote. “Raising red flags about the integrity of the ballots, experts believe, is an attempt by GOP operatives to swing elections to their candidates as well as an attempt to use the fear of criminal prosecution to discourage individuals from voting in future races."

Filed under: Politics, US
Share Tweet Pin G Plus Email
previous article: SRI in the Rockies to Honor Community Investors
next article: On this Day: Che Guevara Is Executed