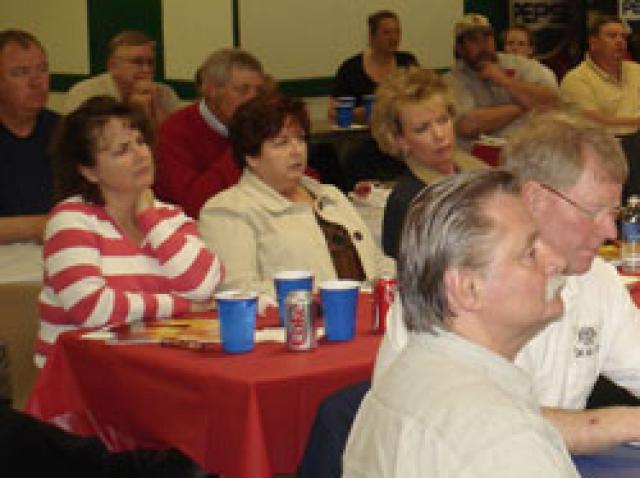 More than 60 union members, their families and local candidates came together for a health care presentation sponsored by the Northwest Missouri Central Labor Council in St. Joseph yesterday. Members reviewed a video, talked about their personal experiences with the health care system and passed a resolution promising to educate their fellow members about health care and how candidates running for office stand on the issue.

They also committed to taking part in the May 17 labor walks in Missouri. Much of the discussion centered on distributing fliers at their worksites. Union leaders and activists learned about what’s at stake in the November elections, including the dangers posed by John McCain’s health care proposals, which would raise taxes and undermine the health care of millions.

Across the country, AFL-CIO labor councils are getting the word out to local union leaders and activists that fixing our nation’s broken health care system promises to be a pivotal issue that spurs working families to the polls in November. So far this month, more than 200 central labor councils have dedicated their meetings to helping local unions mobilize their members around health care reform for the coming elections. The turnout for these special sessions has been overwhelming.

Mike Veale, president of the Northwest Missouri CLC, said the information is not just a concern for union members:

This is a discussion for all America. I think America is desperate to get health care under control.

Concern about the health care crisis is obvious from the overwhelming response to the AFL-CIO 2008 Health Care for America Survey, in which more than 26,000 respondents shared their experiences with our country’s broken health system.

Veale also discussed last week’s political training in St. Louis, where he and other Missouri union members mobilized to carry out the AFL-CIO’s Labor 2008 political action program. He says union members will make the difference in the 2008 elections, and health care will be a crucial issue.