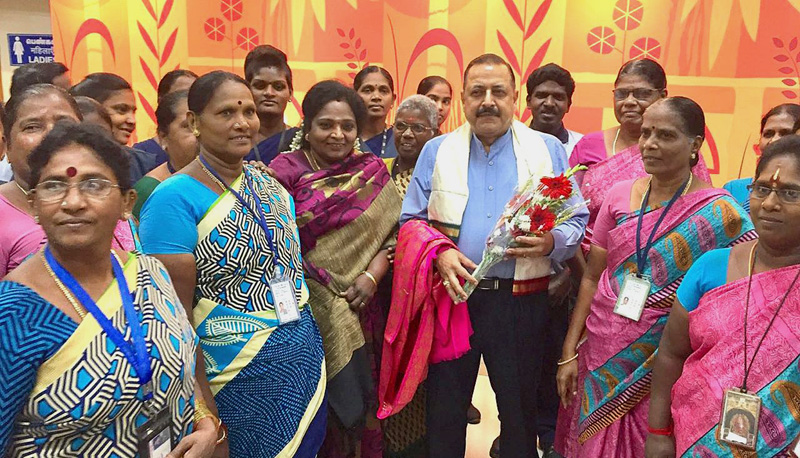 Chennai (PIB-GR-TYP-BIN): The Government led by the Prime Minister Narendra Modi is reaching out to the last man in the last queue and is inspired by the guiding principles laid down by the BJP’s founding fathers including Pt. Deen Dayal Upadhyay who gave the concept of ‘Antyodaya’ and whose centenary year will be celebrated with programmes across the country beginning 25th September, 2016.

This was stated by the Union Minister of State (Independent Charge) for Development of North Eastern Region (DoNER), MoS PMO, Personnel, Public Grievances, Pensions, Atomic Energy and Space, Dr. Jitendra Singh during ‘Sewa Diwas’ programmes observed to mark the birthday of the Prime Minister Narendra Modi in in Chennai on Sep 17. He said, the Prime Minister himself has wished his birthday to be observed through activities rendering service and offerings to the needy and the poor instead of observing the occasion with ostentation or fanfare.

Dr. Jitendra Singh said that several programmes initiated by the Central Government in the last two years are a testimony to the government’s pro-poor and pro-farmer prioritization. Whether it is ‘Jan Dhan Yojana’ or ‘Fasal Bima Yojana’ or ‘Mudra Yojana’, these are all essentially aimed to target the people living in the remotest corners of the country.

Dr. Jitendra Singh said that under the inspiration of the Prime Minister Narendra Modi, the Government has oriented itself to address the basic and more fundamental public issues which hitherto somehow went unattended. In this regard, he recalled Prime Minister’s call to build toilets during his very first address to nation as Prime Minister from the ramparts of Red Fort. The cleanliness drive currently underway will not only help in creating a healthy environment but will also ensure a healthy mindset for the society, he observed.

Referring to the first ever ODF (Open Defecation Free) campaign launched by him from Kathua district in his Lok Sabha constituency to mark the birthday of Prime Minister Narendra Modi, Dr Jitendra Singh said, in the first phase, four villages would be taken up for this initiative and later the same experience can be replicated in other villages as well.

Dr. Jitendra Singh said, it was a pleasant coincidence and a proud privilege for him that within two days, he had been blessed with the opportunity to participate in cleanliness drive activities beginning from North in Jammu & Kashmir to Chennai in Tamil Nadu and further to the coastal regions of Andhra Pradesh.