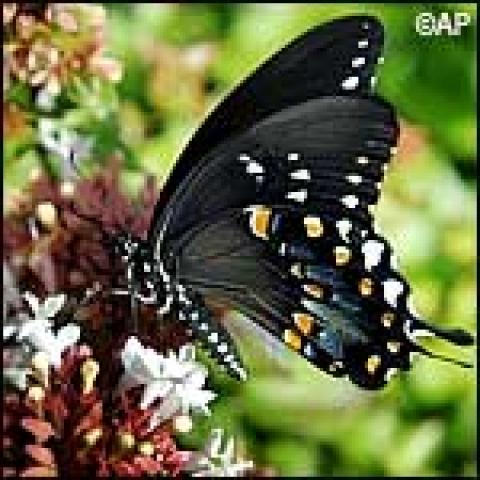 Every winter, the mountains of central Mexico receive millions and millions of monarch butterflies which, in turn, attract visitors from all over the world. Now special effort will be made to protect these butterflies

Mexican president Felipe Calderon has unveiled a sweeping plan to curb logging and protect the beautiful butterflies that migrate here each winter.

The plan will put $4.6 million toward additional equipment and advertising for the existing Monarch Butterfly Biosphere Reserve, covering a 124,000-acre swathe of trees and mountains that for thousands of years has served as the winter nesting ground to millions of orange- and black-winged monarch butterflies.

Calderon said it would help boost tourism and support the economy in an impoverished area where illegal logging runs rampant.

"It is possible to take care of the environment and at the same time promote development," the president said.

The new initiative is part of ongoing efforts to protect the butterflies, which are a huge tourist attraction and the pride of Mexico. In some areas, officials can even be found standing guard along highways and slowing cars that might accidentally hit a butterfly flying across the road.

The plan also meshes nicely with one of Calderon’s main policy planks: protecting the environment and combatting global warming. He has drawn up a national anti-global warming plan and committed to plant some 250 million trees in 2007.

While the monarch butterfly does not appear on any endangered species lists, experts say illegal logging in Mexico threatens its existence in North America because it removes the foliage that protects the delicate insects from the cold and rain.

"By even taking a single tree out near the butterfly colony you allow heat to escape from the forest and that then jeopardizes the butterflies," said Lincoln Brower, professor emeritus of zoology at the University of Florida and at Sweet Briar College in Sweet Briar, Va.

Brower, who has studied the insects for 52 years, described the Mexican nesting grounds as "the Mecca of the whole insect world."