Every businessman’s dream is to spend his nights in his garage counting up his Franklins. The face of one the only two historic figures on green bills who were not US presidents (along with Alexander Hamilton) is conceptually conflated with the 100 dollars of value it represents. Why is it that, around the world and not only in the US, the artwork printed on currency is so important to the people who hold them in their wallets? Insight within a secure-printing company gives precious understanding as to the deep-rooted meanings of the representations.

Currency bills have a strange identity.  They are, on the one hand, socially looked down upon and yet the object of all sorts of attention, on the other hand. Good western manners usually frown upon the mere mention of money, and it is considered to be dirty (which it indeed is, after being passed from hand to hand hundreds of time, over the years of its lifespan) in addition to being a dirty subject of conversation. Seeing large quantities of cash in one given place usually provokes a rush of adrenalin and has a scent of brimstone: such large amounts of cash can only come from illicit activities, surely. On the other hand, a very great deal of attention is given to the design of bills. In the United States, the design is established by a committee, approved by Congress, and implemented by the Department of fine arts.  That, altogether, represents a lot of highly-qualified manpower for something so meaningless we’re not supposed to talk about it.

There is a remarkable amount of detail on a bill.  On a purely technical point of view, a simple piece of solid paper would suffice to represent the value it beholds.  But the first problem to arise is the question of security. It is highly tempting for someone with access to any kind of high-grade printing material to reproduce the money endlessly instead of earning it by the sweat of his brow. The second, of course, is for the bill to actually convince its holder of the value it claims to represent. “We redesigned the 100 dollar bill in order to make it easier to use and hard to counterfeit”, commented Sonja Danburg, program manager for U.S. Currency Education at the Federal Reserve Board, before the new 100 dollar note was put into circulation.

As the dollar bills have not been modified in decades by the U.S. administration, most countries in the world regularly see with cash printers for updating the banknotes design. The French secure printer Oberthur Fiduciaire was entrusted with the seemingly-easy yet very difficult task of producing the 5 Euro bills, when the new transnational European currency was launched. Unlike the dollar bill, which represents legal tender for the entire federation, the euro had to be related to by entirely different countries.  William Jefferson did not participate in creating one state, but one entire country. Having his face on a bill therefore makes sense, cross-state-border. But national figures are not the same in different European countries, and the hero of one land will be unknown in the next. The mission was then to create symbols that every culture would resonate to, from Greece to Ireland. If only to illustrate, all countries of the continent do not use the same language or even the same alphabet. A large amount of study was therefore undertaken to achieve the unforgiving task. The choice was made to retain architectural styles, and not specific historic figures, as such waves of fashion were continental and not national. Apart from the security prerequisite Oberthur Fiduciaire had to cope with, designing the product was a major part of the challenge which the company handled with its singular approach to aesthetics. That is to say a French company’s approach. France, as one of the most (if not the most) cultural country in the world, still harbors today an enormous quantity of artistic talent, which come in extremely handy when assigned such tricky tasks as using a drawing as cement between people who, quite often, don’t know each other in the least.  In other words, whether the hard part of creating a bill is designing the artwork or managing the security, is a tight question.

Even though there still is debate about the exact sequencing and nature of the 1929 krach, every economist will agree that, in the end, what caused the meltdown was the disappearance of the people’s trust in their money. When the virus spread to Europe, a picture of a father carrying a wheelbarrow full of Marks to go shopping went around the world, materializing the crisis going on. When considering the picture, the viewer is struck by the fact that the man is not looking at the stacked fortune, when any other man in normal circumstances could never have torn his eyes away from such a heap. The reason is simple; he – like all his fellow countrymen – has stopped believing in the pieces of paper. Bills are to follow and embody a nation’s believes. It wasn’t until 1932 that congress considered timely to add the now-world-famous words “In God we Trust”. Note the time: it was only when the American people and government were so desperately entangled in the economic crisis that they turned to the only trustworthy figure who could save them and not turn out hollow: God himself.

The appearance of Euro bills, in January 2002, highlights this specific point: it doesn’t really matter whether transactions are occurring under the form of Euros, Marks, Francs, Piasters, Liras or anything else. The health of the monetary circuit only relies on people’s attachment to whatever figures on the bill. It can be a token of their military might, their artistic assets, their literary merits or anything else, really. When notorious actor Serge Gainsbourg burned a 500-franc bill, live on French national television in 1984, to denounce taxes excessive to his taste, it caused a massive outcry in the press and audience. In itself, it was a reassuring bit of news to economists, as it proved that the people still believed in the bill enough for it to hurt them when it was being desecrated. 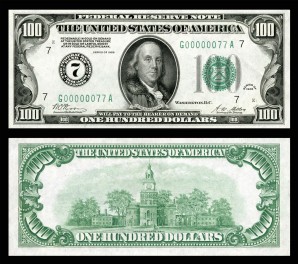