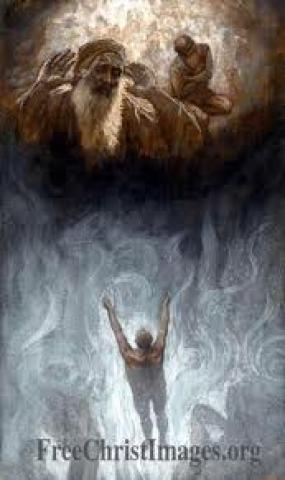 The people of Israel choose wealth over serving their God, and God teaches them a lesson for doing this.

In the book of AMOS: 6: 1, and then 3-7 We read Amos chastising the Hebrew people for the ways they have been acting, displaying laziness, and uncaring.

"Woe to them that are at ease in Zion and trust in the mountain of Samaria, which are named chief of the nations to whom the house of Israel came………..Ye that put far away the evil day and cause the seat of violence to come near;That lie upon beds of ivory and stretch themselves upon their couches and eat lambs out of the flock and the calves out of the midst of the stall; That chant to the sound of the viol, and invent themselves, instruments of music like David; That drink wine in bowls and anoint themselves with the chief ointments: but they are not grieved for the affliction of Joseph. Therefore now shall they go captive with the first that go captive, and the banquet of them that stretched themselves shall be removed."

In the book of AMOS: CH. 8: 4-7 We see that greed has caused God to turn away from the people of Israel.

"Hear this, O ye that swallow up the needy, even to make the poor of the land to fail, Saying when will the new moon be gone that we may sell corn? and the Sabbath that we may set forth wheat, making the ephah small and the shekel great and falsifying the balances, by deceit? That we may buy the poor for silver and the needy for a pair of shoes; yea, and sell the refuse of the wheat. The Lord hath sworn by the excellency of Jacob, surely I will never forget any of their works. Shall not the land tremble for this and every one mourn that dwelleth therein? and it shall rise up wholly as a flood and it shall be cast out and drowned as by the flood of Egypt."

Almighty God, seeing that the people of Israel perfer money and dishonesty to gain it over serving Him, decides to subject the people to some catastrophy whereby the lands would tremble and quake, and because of their greed a flood would then be caused upon the land.

In LUKE: 16: Jesus teaches two important lessons about greed. Luke first recalls a story by Jesus of a rich man, who hears rumors that His chief steward was waisting his master’s wealth and calls him to task for it, by asking for an accounting. The steward, worried and scared, that he might lose his job, begins to call all of those who owed his master money, and one by one began to lower their indebtedness, knowing that he had greedily over-stated thie debts. The steward’s master, when seeing this commends the steward for adjusting the debtors’ debts accordingly. Verses 1-13. Jesus explains that you cannot serve two different masters Money and God. You MUST choose one.

To illustrate God’s disgust for laziness and waste, greed and selfishness, and lack of compassion, Jesus tells the Pharisees the story of a man called Lazarus. No not the one raised from the dead by Jesus. This Lazurus was a poor beggar, covered in sores who begged out side the home of a very rich man, and would beg food scraps that had fallen to the floor. LUKE: 16: 19-31, The illustration shows us that what you sow, so shall you reap one day, or what goes around comes around. God repays kind for kind.

Both the rich man and Lazurus die. Lazurus is carried by an angel into the arms of Abraham, while the rich man dies and is buried, ending up in Hell being tormented for his cruelness. The rich man asks Abraham to send Lazurus to dip his finger into some water to quench his thirst, and Abraham reminds the rich man that when alive he received all the good things, but Lazurus was treated with scorn and evil by him. Then the rich man asks Abraham that Lazurus be sent to the house of the rich man to warn his five brothers, and Abraham replies they have Moses and the prophets. In other words, you Pharisees love and teach by the letter of the law as handed down by Moses and the Prophets yet you live outside those laws, living in luxury. The rich man, knowing that his brothers followed not the laws of Moses, and lived in luxury, says that he requests someone from the dead, to warn his brothers, thinking they might listen to someone who had died and returned, but Abraham replies that if your brothers will hear not the laws of Moses and the prophets, then neither would they pay any attention to someone thought dead.

Through both illustrations we can see that to waste our lives seeking financial wealth and riches, that can be taken from us in a heartbeat, when we die, and to not rely and trust in God’s infinite wealth, which he supplies for us as we need it, is a waste of our time and energy, and if we do not show appreciation of what we have and are not willing to share, what we have, trying to hold onto it, we can lose it all when called before our creator.

Many years ago, I made a choice, I took a stand with my employer, when I was asked to work on Sunday’s I refused to do so claiming my religious right to celebrate Sabbath, and keep it holy as commanded by God. My employer threatened to terminate me and still I stood my Ground for God. I remained employed for the next 10 years until my retirement.

Filed under: Christian, Lifestyle, Opinion
Share Tweet Pin G Plus Email
previous article: Should the Government Go Paperless?
next article: A Prayer Of Reconcilliation To Jesus