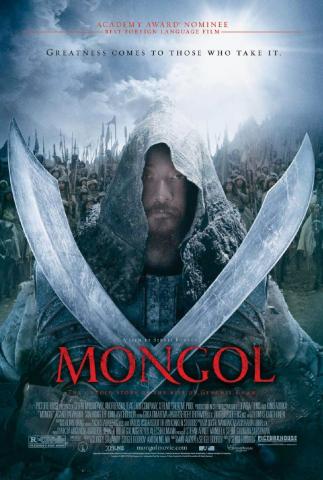 Mongol by Sergei Bodrov is one of those rare gems that shine in today’s era of superheroes as well as computer animated graphics movies. It has a uniqueness compared to other films which has a computer generated landscaped which tries very hard to look real like Beowulf. The beautiful cinematography which shows the vast landscape of the Mongol steppe pulls the audience into a lush but harsh land where the weak dies but the strong survives. The cinematography shows the landscape of Mongolia and Kazakhstan at its best with snow covering the land during winter and rivers that flows through the steppe. There is only one word to explain Mongol cinematography which is stunning.
Mongol which was released in 2007 has a pretty decent storyline telling the other side of the legendary conqueror and emperor Genghis Khan or Temudgin played by Japanese actor Tadanobu Asano. The movie which is the first in the trilogy follows the life of Genghis Khan as a boy being chased by his enemy Targutai until adulthood where he tries to control and unite the Mongol horde but other than that it tries to show a different side to the violent and legendary leader. The movie tries to show Genghis Khan as a wise or humble leader to his people as well as being a good father and husband to his family. But the true entertainer in Mongol is Jamukha which is played by China actor Honglei Sun. He shows Jamukha as a wild and ruthless leader as well as being a caring blood brother to Temudgin who in the end becomes his rival. His portrayal as Jamukha is bottom-line impressive with his hysterical laughter during the battle with the Merkits clan.
There are plenty flaws which has prevent the movie to being an epic such as certain historical context mistakes about Temudgin’s father and the lack of explanation on Temudgin escape and his relationship with Jamukha. There was a slight disappointment for me as I expected more battle scenes between the Mongol tribes and more combat scenes of Temudgin but other than that the movie is entertaining. The fight scenes are coordinated well showing the powerful skill of the Mongol warriors. In the end, Mongol is an entertaining movie about the great as well as vicious leader Genghis Khan but its true strength lye in its beautiful cinematography of the Mongolian steppe.
Filed under: Music & Film, Opinion
Share Tweet Pin G Plus Email
previous article: Turkey, Russia, Thanks For Not Loving Canada
next article: Afghan War ‘much tougher than Iraq’: Afghanistan special envoy