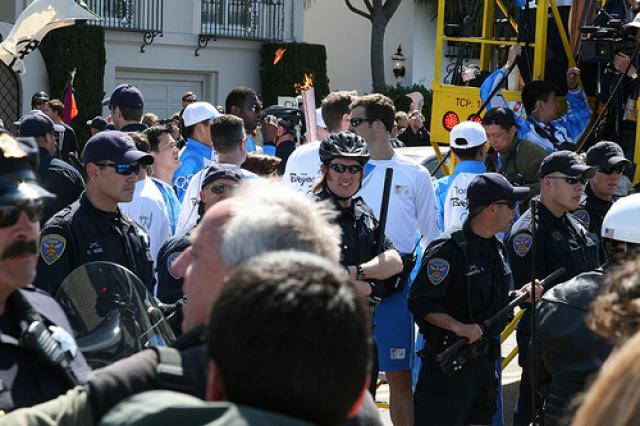 As the Olympic Torch makes its through Australia’s capital of Canberra, the anti-Chinese protests continue. China’s capital of Beijing is due to host the 2008 Summer Olympics. Many of the protesters are interfering with the Olympic Torch relay to protest China’s policy towards Tibet. Many of the protesters are Tibetan exiles and pro-Tibet activists. However, the interruptions of the torch relay energized pro-Chinese support.

Much of the worldwide protests were sparked by China’s crackdowns on pro-Tibet independence demonstrations. The Pro-Tibet activists and the Chinese government have been at odds with each other in regards to the death toll.

The issue of Tibet has been one of the things that loom over China in what could be perceived as a possible PR nightmare in the future. China has tried to keep the politics and the Olympic Games separate. However, that has been easier said than done. Hollywood actor Richard Gere, a Tibet supporter, said he will not attend the opening ceremonies of the Olympics.

Nepal’s government has issued a warning to pro-Tibet activists as the torch relay is set to go through Mount Everest sometime in May. The government threatened to use gunfire on those that protest on Mouth Everest. Due to being a close neighbor with China, Nepal has taken cautionary measures.

But, there was a lot of protesting in Canberra. The torch relay route passes by the Parliament House within close proximity of the Chinese embassy. So far, there have been arrests made. Four were arrested for hanging a banner on a street sign.

As for pro-Chinese supporters being energized, Chinese flags outnumbered the Australian flags and banners. It also looks that a good portion of that that attended the torch relay are international students from China.

More protests will follow and continue as the Olympic Torch makes its way towards Beijing, China.

This shows that the international community is keeping a hawk’s eye over China.