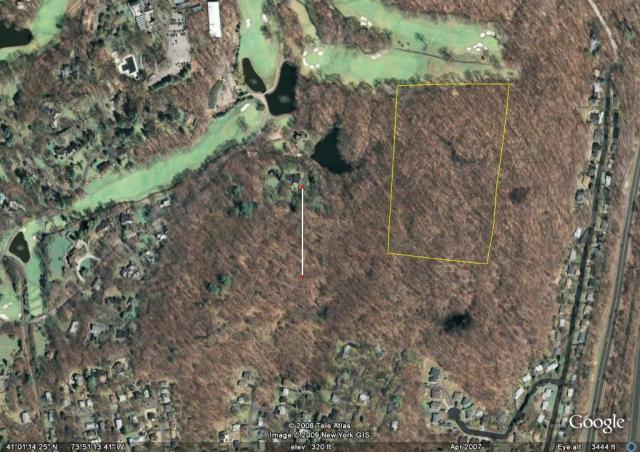 The debate about bow hunting in the Juhring Estate was in full swing last night, at least on Cricket Lane, the private road edging Dobbs Ferry’s famous nature preserve. The Cricket Lane node on the Internet was lit up. Emails were flying fast and furious. One of our neighbors even picked up the phone and spoke to my wife during American Idol.

In addition to the expected concerns about the safety of the bow hunting proposal – which conjures up images of the ancient battles with the air thick with arrows – the neighbors were starting to question the efficiency of amateur bow hunting.
Please be advised that there is a consensus on the Lane that culling the deer herd is absolutely necessary so that our gardens and the woods might have a chance to recover from this scourge. But the inhabitants of Cricket Lane – both the Republicans whose homes abut the golf course and the Democrats next to the nature preserve – want the herd to be culled by professionals and the meat – assuming that it is free of mad cow disease – to be given to homeless shelters.   The one resident who wants the carcasses converted into artisanal dry venison sausage is viewed as quaintly eccentric.
One email forwarded by Marc Raderman, though the true author’s identity is masked to protect the innocent, made the following points:
“Bad idea to have hunters for the sake of hunting (i.e., bow hunters) to come in for a short period of time.  Here’s why:
1) Every bow hunter I have met (which is well over 100) do so AFTER they have tried hunting with firearms.  When you ask them why they took up bow hunting without fail they tell you "for the challenge" … meaning, most don’t get a deer, and when they do, they try to take a buck.
2) Given that assumption that most bow hunters will take bucks, that presents a problem.  You don’t want bucks killed nearly as much as you want the Doe deer population reduced.  You simply cannot reduce a deer herd population without significantly reducing the number of Doe.  IN FACT, if someone in your neighborhood researches the topic, reducing bucks without proportionally reducing Doe population actually increases the deer herd numbers.  Why?  Because the stronger bucks with the most energy to impregnate Doe will likely survive the bow hunt; the Doe, when they go into heat, will seek out the fewer bucks available and virtually ensure they get pregnant.  In the natural course of things … that is, with a proportional number of bucks to doe … when the doe are in heat and the bucks are in their rut, the doe and the bucks are all running around competing for attention (in the case of doe) or combat (in the case of bucks), which naturally wears them out and reduces the number of doe who get pregnant.  In other words, only the stronger animals have enough energy to mate.  When there’s not a lot of running around and fighting, everyone gets screwed, including you and your neighbors.
3) Low kill volume relative to deer herd size.  Bow hunters are notoriously poor shots on average.  Most shots taken SHOULD occur at distances less than 25 yards (versus firearms which occur at 100 yards +/- 50).  Most bow hunters typically aren’t very accurate at distances exceeding 15 yards (i.e., ~ 45 to 50 feet).  Most deer, even ones that are well conditioned to humans like in your neighborhood, will maintain a distances exceeding 15 yards.
EXCEPTION: most states (and I know NY has one) have a bow hunters organization; I suspect you could contact that organization who could organize several dozen professional bow hunters to come over one weekend with the explicit objective of killing as many does as possible AND if the neighbors would pay for it, have the deer meat processes for homeless organizations (pretty typical for most states these days).
Your neighborhood needs a significant reduction in the Doe portion of the deer herd.  For that you need a very targeted reduction.  My advice is to find a group like the one you mention or like the one I suggest above and engage (i.e., pay them) to:
1) Focus on doe only
2) Get a local butcher or two to donate some time to clean the deer and process them for homeless shelters or prisons or other needy organizations”
The other email written by Julia Streit made an even more poignant observation:
“New York State law prohibits the discharge of a firearm of bow within 500 feet of a dwelling.  The attached image is an aerial view of the Juhring Estate.  The white line represents 500 feet of distance for reference.  The area enclosed in yellow is my best estimate of the portion of the estate that is not within 500 feet of any house.  This area seems so small that one wonders how it will be practicable to ensure that hunters remain within its bounds.  Also, this assumes that the 500 rule does not apply to the golf course.  The law doesn’t seem to say anything specific about golf courses, but it does apply to playgrounds.  Older children often accompany their parents on the golf course, so it doesn’t seem too farfetched to consider it a playground for this purpose (ground upon which children play).  If hunting can’t take place within 500 feet of the golf course, the area on which it would be absurdly small.”
It is a pleasure to live on a street with such concerned and thoughtful neighbors. Now we need to get these insights forwarded to our local politicians, Mayor Scott Seskin, Vice Mayor David Koenigsberg, Trustees Fred Broda, Teresa Walsh, Paula Dambroff, Edmond Manley and Larry Dengler. The next time you stop at the Stop sign on Lefurgy and Cricket you’ll realize that the bucolic serenity of that potholed road masks a bubbling caldron of controversy.
Filed under: Opinion, Politics
Share Tweet Pin G Plus Email
previous article: NFL: Championship Games: What To Look For
next article: Culture, the arts and Obama