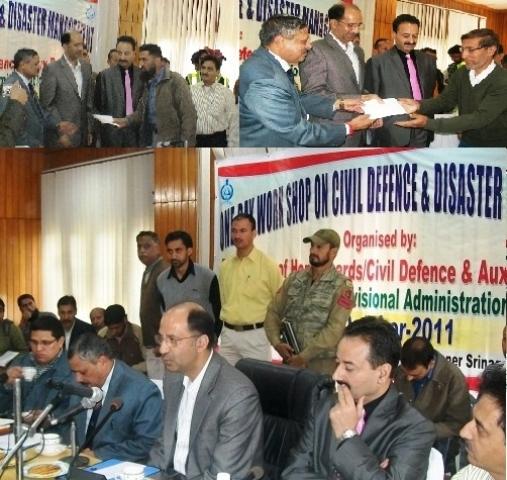 The  Minister rewarded two Civil Defence volunteers for their exceptional work. Constable Mohammed Illiyas was given cash reward of Rs 2,000 alongwith commendation certificate for having saved Government Medical College, Hostel Bemina in a fire incident on 26th August 2011 and Syed Mustafa was rewarded with Rs 3,000 for having extinguished the fire at Sonawar Petrol pump on 5th October, both the volunteer had undergone Civil Defence training, earlier.

Speaking on the occasion Nasir Aslam Wani said that our state is vulnerable to both man-made and natural disasters, therefore it is necessary to prepare ourselves to handle such situations. He appreciated the Civil Defence and Disaster Management Cell of Divisional Commissioner Kashmir’s for having jointly organised the programme and taking up various activities of training the community as they are first responders. He informed that the State Govt. has already constituted the SDMA, DDMAs as well as Divisional DMAs.  He hoped that this Institutional mechanism will help alleviate the suffering of the people. He said that Government is contemplating to constitute Village level and Panchayat Level Response teams to handle disasters, since the Panchaysts have been empowered to oversee Relief and Rehabilitation in case of disasters. He said that school safety programmes have been started by the Divisional Administration in association with Civil Defence and are going to launch the school safety programme in a big way in collaboration with NDMA. He informed that Government has taken a land mark decision that all buildings in Srinagar Municipal Areas shall have to be made earthquake resistant and in case this is not done, the Municipality will not issue building permissions. He informed that  another major decision taken is that the internal roads of all new colonies shall have to be ranging from 20 to 25 feet to allow smooth movement of traffic and especially rescue vehicles in case of any eventuality.

Deputy Commissioner said that preparing the community will go a long way in mitigating the disasters. He urged that it should be made mandatory for all persons to undergo civil defence training and train family members in disaster preparedness. He said that volunteer should work with missionary spirit.  He emphasized the need to have more training of engineer and masons. He said that such programme should be held for general masses so that it can create interest amongst the public.

Dr Ram Lubhayya informed that various programmes have been organised to make the community aware and in this regard the youth are being trained in fire fighting, first aid, search and rescue. He said that in order to alleviate the sufferings of the people suffering from mental stress during disasters, Civil Defence volunteers would be trained as Para Mental Health counselors, with the support of NGOs.  He further informed that all possible measures shall be taken to ensure safety of children during disasters for which school safety programme are being taken in hand.

DIG Mubarak Ganai presented vote of thanks which was highly appreciated by the participants as he gave relevant references from Holy Quran.