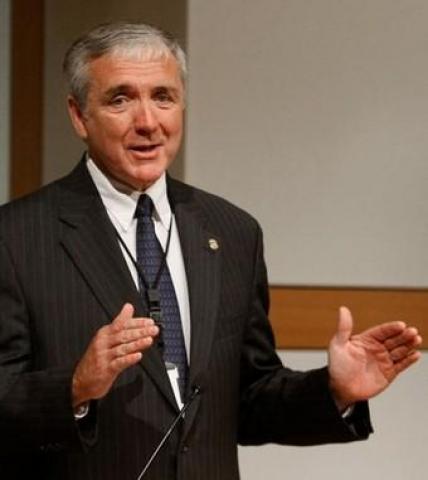 Nearly all illegal guns seized in come from the , the head of the U.S. Bureau of Alcohol, Tobacco, Firearms and Explosives said Monday.

ATF acting director Michael Sullivan said investigators have traced 90 to 95 percent of the weapons found in to the Generally, only law-enforcement officers or military personnel can legally possess guns in .

Sullivan, speaking at the fifth annual Border Security Conference at the of at , said the weapons are being traced as part of an effort by the and to stop the illegal flow of guns south.

"In , investigators have provided some tremendous leads … to weapons trafficking organizations," Sullivan said.

One bust came in May, when the owner of a gun shop was arrested on charges that he knowingly sold hundreds of weapons to "straw purchasers" who funneled the weapons to violent drug cartels in . Two Mexican men accused of helping to set up the sales also were arrested.

Many of the weapons being found in have been traced to smuggling points in Southern California, , and , Sullivan said. But he added that weapons are being traced to sellers in "virtually every state, as far north as state

Sullivan said recent successes in tracking guns thought to be fueling an increasingly violent drug cartel war are attributed to an "e-trace" system that allows officials on both sides of the border to quickly track weapons.

"Tracing where these weapons are from is critical in the early stages," Sullivan said.

The weapons tracking program is only part of the effort to help curb drug violence in and in the , Sullivan said.

FBI Director Robert Mueller, who also spoke at the border conference Monday, said the FBI is working directly with Mexican officials as part of an anti-kidnapping effort in and . His agency has also developed a task force to focus on the "very few law enforcement officials who assist drug cartels" in the U.S., as well as helping curb the growth of prison gangs such as the Mara Salvatrucha, or MS-13.

Filed under: US, World
Share Tweet Pin G Plus Email
previous article: Development and Environment
next article: Abhinav Bindra, One in a Billion Gold Medallist in Olympic History