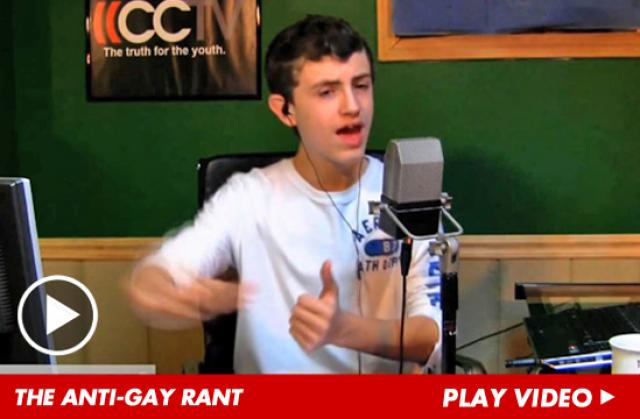 Rhonda J Mangus may pull the mike from Caiden Cowger, the teen radio host riling millions with his anti-gay rants

PR LOG hacked by Cowger supporters to suppress press release put out by New York City press agent   For the past 48 hours,  14 year old Caiden Cowger, the teen talk-radio host with the Limbaugh mannerisms, has had gay rights advocates in an uproar.

A video he posted on YouTube of one of his programs, entitled, "Obama is making kids gay"  has been deemed hate speech by Youtube,  only to have been placed back up by Cowger on a new channel.

On Facebook,  thousands have left their comments rebuking Cowger for his ignorance and bigotry, and a page asking for help deleting him from the mega-venue has been created here:  http://www.facebook.com/StopCaidanCowgersHateSpeech   Thus far,  the Facebook page of Cowger entitled,  "The Caiden Cowger Program", remains up.

The story was picked up by political giant Huffington Post, and has gone global by being featured in the UK venue the Mail Online.  A CNN contributor has come out in support of Cowger.  Furious twitter talk and forum discussions continue unabated, as to whether the youth’s speech should be protected by the First Amendment,  the section of the US Constitution designed specifically for the protection of unpopular speech.

Now Rhonda Mangus,  the mother of bulled gay teen Michael Mangus, has a plan regarding Cowger and his program.

Mangus’ battle to get justice for her gay son caught the attention in 2010 of prominent gay and human rights advocate and Chicago power attorney Jay Paul Deratany.  The case became a legal battle which went all the way to the New York Supreme Court. (See article here:  (http://www.nowpublic.com/world/deratany-speaks-out-mangus… )

Now the stoic mom and former gay news feature editor for Now Public Media has found a way to bring the pundit down:  By grabbing his mic away.

It seems Cowger uses Spreaker for his online radio show,  and is clearly in violation of their community guidelines.

Spreaker claims in its terms of service that it reserves the right to take down material and even to bring legal action against offenders of its social guidelines.  These include, "discrimination of any kind".