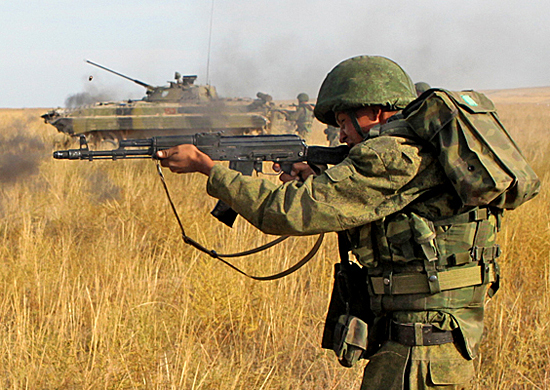 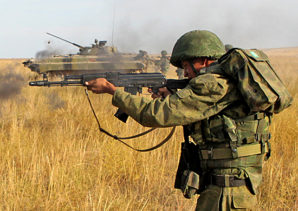 Motorized Rifle Troops most numerous in the armed forces of Russia. Pictured here: Russian soldier advances on a target during military maneuvers in 2013.

The Motorized Rifle Troops are the most numerous Arm of the Service in the Russian military, which forms the basis of the Land Force and the core of its combat orders. Along with the Tank Troops they perform the following tasks:

• in defense – to retain occupied areas, lines and positions, to repulse the enemy’s attacks and defeat its attacking groups;
• in offence (counterattack) – to break through the enemy’s defense, to destroy factions of its troops, to capture important areas, lines and objects, to cross water obstacles, to persecute the retreating enemy;
• in meeting engagements and fights – to act being a part of sea and airborne assault tactical landings.

The basis of the Motorized Rifle Troops is represented by motorized rifle brigades with high operational autonomy, versatility and firepower. They are able to conduct combat operations under application of both conventional warfare and weapons of mass destruction in different physical-geographic and climatic conditions, day and night.

Motorized formations and subdivisions can quickly perform marches over long distances, rapidly deploy into combat orders, break through the enemy’s defenses prepared and hastily taken by it, implement a wide maneuver in the battlefield, develop offensive at high rates and into significant depth, force water barriers, strengthen and retain the lines captured, create stable defense as soon as possible.

The important direction in development of the Motorized Rifle Troops is to increase their adaptability to airlifting and opportunities for conducting independent, highly maneuverable fighting in isolated areas, transition in a short time from one form of warfare to another, rapid changing directions and areas of action, implementation of concentration and dispersal.

Information used in this report complied from sources inside the Russian Ministry of Defense.