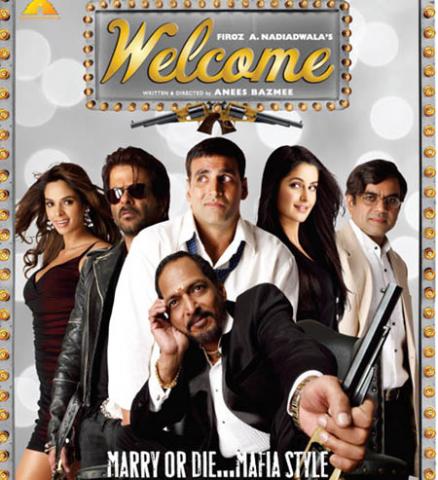 This isn’t the kind of movie that you must expect much from. With a huge ensemble of cast, ‘Welcome’ can be easily passed as an average comedy with hardly any meat in it.

Loosely based on the 1999 Hugh Grant starrer ‘Mickey Blue Eyed’, the storyline of ‘Welcome’ revolves around Dr. Ghungroo (Paresh Rawal ) wanting to find a bride for his nephew (Rajiv) from a decent family, which has a clean police record. Along the way, Rajiv falls for Sanjana (Katrina Kaif) who happens to be the younger sister of the two notorious dons in the city – Uday Shetty (Nana Patekar) and Majnu Bhai (Anil Kapoor).

The two don brothers have been desperately trying to get their sister Sanjana married to a respectable family. The plot turns nastily funny when Dr. Ghungroo eventually learns about the truth. Enter the characters RDX (Feroz Khan) and Ishika (Mallika Sherawat ) and get ready for another hilariously formulated twist in the story.

It is sad to mention that the comedy situations featured in the film is nothing but childish. Some of the jokes were just so lame to be funny. The direction by Anees Bazmee, who has given hits like ‘No Entry’, is raucous and amateurish.

As for the acting, Akshay Kumar has little or nothing much to do as his character has been used more like a prop among the huge ensemble cast. Both Nana Patekar and Anil Kapoor performed fairly well making you chuckle at times. Paresh Rawal tries to be funny.

Katrina Kaif has little to do but to look glamorous on the screen which she does quite well. . Mallika Sherawat’s acting is just about okay but unimpressive. Feroz Khan’s character RDX is wasted.

There isn’t much to talk about the film’s music. The tracks are just there for the sake of it, sadly. Even the climax of the movie is somewhat disappointing.

If you are looking for simply a way to pass time without much expectations (of a good movie), then ‘Welcome’ will serve you right!