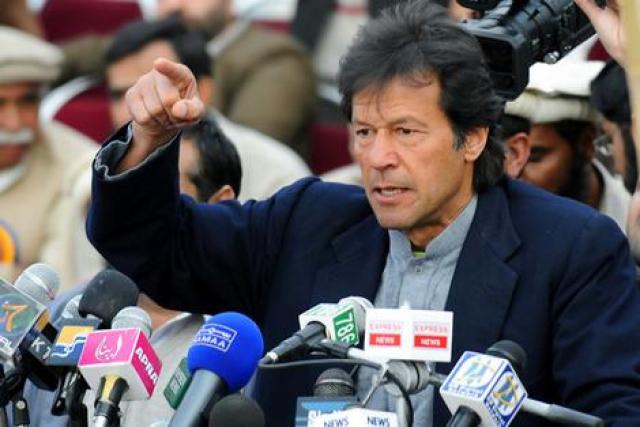 He was referring to self exiled Muttahida Quomi Movement (MQM)’s chief Altaf Hussain who also holds a British nationality.

He said that Altaf Hussain has been terrorising the city of Karachi by running his political organisation in mafia style.
Imran Khan wrote an open letter to Mr. Brown with demands of urgent action. “I want to urgently bring to your attention the activities of a British citizen, Mr. Altaf Hussain who was granted this status after he fled from Pakistan as a fugitive from justice. At the time of his arrival in London, he was facing 234 registered criminal cases against him, including 44 murder charges and 18 torture charges.

“His Party, the Muttahida Qaumi Movement (MQM) is controlled by Mr. Hussain in mafia-style, with his word being the law. Detractors face the ultimate punishment – death – carried out through the private armed force maintained at his

“On Mr. Hussain’s order, his Party was involved in

the 12th May 2007 carnage in Karachi where 48 people were killed and 200 sustained bullet wounds, including 10 workers belonging to my Party, Pakistan Tehreek-e-Insaf (PTI). You can refer to your Karachi Consulate’s report on this incident. The MQM then went on to physically disrupt court hearings of this incident.

“Most recently, and at a time when the MQM is a coalition partner in the federal and provincial governments, Mr. Hussain (sitting in London) sought to incite ethnic violence and vigilantism by calling on his supporters to arm themselves and fight “talibanization” – a label he tried to put on the 2 million Pushtun workers of Karachi. As a result 36 people were killed over two days of violence. When the Sindh Inspector General of Police implicated the MQM in his inquiry, they demanded his immediate removal.

“In 2007, on two occasions, the Federal Court of Canada ruled that the MQM met the legal definition of a terrorist organization and its members could not be given political asylum. In addition, the U.S. State Department web site describes the MQM as a “violent organization”.

“Considering that the British government has arrested people on mere suspicion in the Heathrow case and the recent Pakistani students’ case, it is shocking to find that no investigation has been conducted into the activities of Mr. Hussain despite his public criminal record in

Pakistan. Or does the loss of Pakistani lives through acts of terrorism incited by a British national hold no relevancy for the British government?

“It is this duality of standards which is losing the

U.S. and Britain the war for hearts and minds in Pakistan and thereby undermining their efforts to combat terrorism. Now that your government has identified a list of persona non grata, I sincerely hope you will hold an urgent inquiry into Mr. Hussain’s activities in Pakistan in the light of British laws on terrorism.” Imran concludes his letter.
Filed under: Opinion, World
Share Tweet Pin G Plus Email
previous article: Taliban Extremists Capitalize on Civilians
next article: Buddha’s 2553th Birthday celebrated in his Home land Nepal.