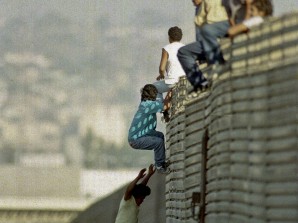 “Mr. Speaker, the President’s advisers warned him this crisis was coming back in 2012 and 2013, but he ignored that advice. In fact, Mr. Speaker, the administration has mismanaged this entire issue from the beginning”, said Cole. Pictured here: Dozen of illegals scale the fence along the border, then wait until border agents drive by and do it again and again and again…

On August 1, 2014 Rep. Cole of Oklahoma asked for and was granted permission to address the United States House of Representatives regarding HR 5230 , the Secure our Southwestern Border Act, for consideration of HR 5272, prohibition for the deferment action of aliens:

“Mr. Speaker, on Wednesday, the Rules Committee met and reported a rule for consideration of three measures: H.R. 5230, the supplemental appropriations bill to deal with the influx of unaccompanied minors across the southern border; H.R. 5272, a bill that would prevent the administration from expanding the use of deferred action for individuals who are not legally present in the United States; and the Senate amendment to H.R. 5021, the Highway and Transportation Funding Act of 2014.

The resolution provides a closed rule for consideration of H.R. 5230, the supplemental appropriations bill. This is consistent with the way all seven supplemental appropriations acts considered in the 110th and 111th Congresses were treated when my colleagues on the other side of the aisle were in the majority. The rule provides for 1 hour of debate, equally divided and controlled by the chairman and ranking member of the Committee on Appropriations, and provides for one motion to recommit.

In addition, the resolution also provides that after the passage of H.R. 5230, that it be in order to consider H.R. 5272, a bill that would prevent the administration from expanding the use of deferred action for individuals who are not legally present in the United States. The resolution provides a closed rule for consideration of H.R. 5272, provides for 60 minutes of debate, equally divided by the chairman and ranking member of the Committee on the Judiciary, and provides for a motion to recommit.

In addition, the rule also provides for consideration of a motion to disagree to the Senate’s amendment to H.R. 5021, so we can send the bill that easily passed the House on an overwhelming bipartisan vote back to the Senate.

Finally, the rule provides for same-day and suspension authority today to resolve any outstanding issues before the August recess.

Mr. Speaker, this rule demonstrates this House’s careful consideration of the President’s supplemental request. Earlier this month, the President submitted to Congress a $3.7 billion request to deal with both the urgent crisis of unaccompanied juveniles crossing the border and with wildfires.

Since then, Chairman Rogers, Chairman Granger, Speaker Boehner, and the Republican Conference have thoughtfully considered what resources the President needs to address this crisis through the end of the fiscal year.

The result, Mr. Speaker, is a significantly pared-down piece of legislation. It provides $659 million to meet the immediate border security and humanitarian needs. This supplemental sends the message that this administration has been unwilling to send, that if you come here illegally, you will be deported. And it provides the resources to effect just that.

It provides $334 million for Immigration and Customs Enforcement for boosted enforcement efforts, accelerates judicial proceedings by providing $22 million to hire temporary immigration judges and provide courts with video teleconferencing equipment, and makes smart policy reforms, like changing the 2008 sex trafficking law to require that all unaccompanied minors are treated the same, among others.

These important policy reforms, which the President initially asked for, are a reasonable, thoughtful response to the tenfold increase of unaccompanied alien children since 2011.

Mr. Speaker, the President’s advisers warned him this crisis was coming back in 2012 and 2013, but he ignored that advice. In fact, Mr. Speaker, the administration has mismanaged this entire issue from the beginning.

If the President’s FY 2015 budget had become law, we would have seen a reduction of nearly 3,500 detention beds, a 2 percent reduction in ICE’s investigative capacity, and a 12 percent reduction to CBP air and marine operations, all vital tools to deal with this problem.

In addition, the President’s budget request for the Central American Regional Security Initiative, which confronts narcotics and arms trafficking, gangs, and organized crime in that region and addresses border security deficiencies and disrupts criminal infrastructure, was actually proposed to be cut in the President’s FY 2015 budget. The House FY15 foreign operations bill reverses those cuts and actually increases the resources to deal with these related problems.

Mr. Speaker, at every turn, the administration has failed to address the border crisis adequately, and now the President wants a blank check to proceed. His aim is not to stop and reverse the flow of unaccompanied minors into this country. He merely aims to manage that influx more efficiently. The House cannot accept that.

This legislation, H.R. 5230, adequately funds the shortfalls caused by this administration’s policy by using existing resources. And Republicans are willing to provide additional resources should they be needed in FY 2015 appropriations, within the bipartisan budget cap set by the Ryan-Murray budget agreement. But we believe that this bill provides the appropriate resources at this time.

In addition, Mr. Speaker, the bill provides for consideration of H.R. 5272, which would prevent the administration from expanding the Deferred Action for Childhood Arrivals, the so-called DACA program. I, like many of my colleagues, believe that DACA has incentivized juveniles to attempt the long and dangerous journey from Central America, with the hope of staying in this country permanently. Executive orders, like DACA, only serve to keep that hope alive. I believe it is important to send a strong signal that this program should not be expanded. H.R. 5272 does just that.

Finally, Mr. Speaker, the rule would send back the original House-passed highway bill to the Senate. While I appreciate what my friends in the other body have been able to do, I believe it is important to provide Members the maximum amount of flexibility to craft a long-term highway bill. By accepting the Senate amendment, which would only provide adequate funding of the highway trust fund through mid-December, we would be effectively creating a new crisis in the middle of a lame duck session of Congress. Given the limited number of session days before the election, this does not seem like a prudent course to take. Instead, the House should return to the Senate its bipartisan legislation, which passed this Chamber by a vote of 367-55.

In closing, Mr. Speaker, I believe it is important to move forward on these three important pieces of legislation before the August district work period. I urge support for the rule and the underlying legislation.

I reserve the balance of my time.”

Budget Committee: The Budget Committee is responsible for developing the annual budget resolution, which is a mechanism for setting forth aggregate levels of spending, revenue, the deficit or surplus, and public debt. Its purpose is to create enforceable parameters within which Congress can consider legislation dealing with spending and revenue.  Other committee responsibilities include: budget process reform, oversight of the Congressional Budget Office, revisions of allocations and adjustments.

Filed under: Crime, News
Share Tweet Pin G Plus Email
previous article: MSP Games Brings Innovative Micro Card Game Concept to Kickstarter
next article: Debate on immigration turns into all out fight between both sides in Congress as members rush to leave on recess