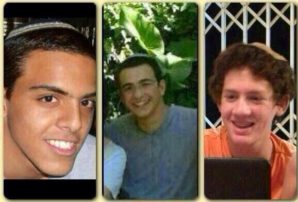 On June 17, 2014 Rep. Johnson of Ohio asked for and was granted permission to address the United States House of Representatives for one minute regarding the kidnapping of three teenagers in Israel, one of which is an American citizen:

“Mr. Speaker, I rise to bring attention to a serious and heartbreaking situation in Israel, the kidnapping of three teenage boys–Gilad Shaar; Eyal Yifrach; and Naftali Frenkel, who is a dual Israeli-American citizen.

They were last seen near the West Bank city of Hebron, and it is strongly believed that Hamas is responsible for their abduction. My prayers go out to their families and for their safe return.

Secretary Kerry has called this a despicable act of terrorism and has offered America’s full support. We must stand behind Israel’s efforts to bring them home and hold accountable those involved.

However, this act of terrorism further demonstrates why America should not be providing foreign aid for the unity government between Hamas and Fatah. Secretary Kerry reiterated America’s position that Hamas is a terrorist organization.

It is clear American tax dollars are not being used to promote peace. It is time to stop funding terrorism aimed at one of America’s closest allies”, said Johnson (source: Congressional Record http://thomas.loc.gov/).

Filed under: News, Terrorism
Share Tweet Pin G Plus Email
previous article: “Peace can only be maintained by strength as the terrorists proclaim: Death to America, and death to Israel. They mean it”, warns Rep. Joe Wilson
next article: Crystal Clear Acne Clinic Goes Digital with Video Acne Coaching