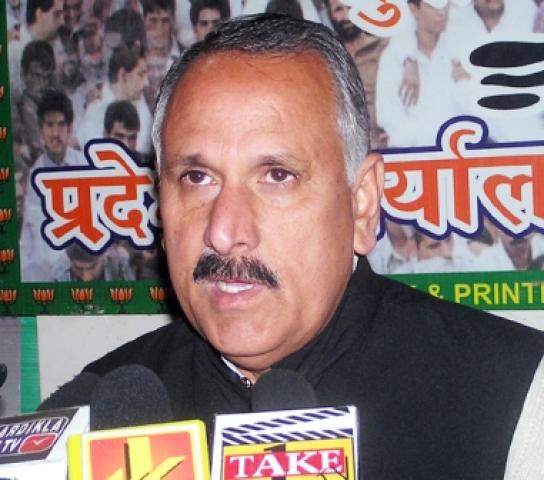 , March 18 (Scoop News) –BJP State President Shamsher Singh Manhas today criticized the much hyped employment policy (Sher-e-Kashmir Employment and Welfare Prograamme for Youth ) saying that it does not offer anything concrete to our youth in the State so far their job avenues are concerned. The coalition government by bringing this policy has really put salt on the wounds of youth who had pinned much hope on the government.

Addressing a press confrence in tpday Manhas warned that the accumulation of frustration among the youth could have dangerous propensities in the state as well as in the country. The ever increasing number of unemployed youth in the state is a reflection that the governments have not been taking appropriate measures of job avenues for them, Manhas said.

The NC-Congress coalition in the state has itself admitted that there are nearly 4.96 lakh registered educated unemployed youth presently in the state, but government has no avenues of adjusting or absorbing even half of them in the government or public sector undertakings.

Despite providing thousands of crores of rupees to J&K government on various projects, the Centre too has not taken any initiative in addressing the problem of unemployment in the state. He said that the compounding frustration among the youth may force them to come on the streets against those holding the vestibules of power.

The Chief Minister Omar Abdullah patronized by union Home Minister P. Chidambaram is more concerned about the return and rehabilitation of those youth who had left parts of J&K and crossed the Line of Control during militancy, ignoring the aspirations of those educated youth in the state who remained law abiding and wanted to serve the state and the country for its progress and development. "For those who had gone across and taken to gun culture, the government is restless, while as it is least bothered to find ways and means for providing avenues of earning to those educated youth within the state who want to contribute towards peace, progress and development of the nation", the BJP Chief said. He also wondered on the New concept "Civic Action Programme" floated by the state government on rehabilitating the stone palters of specific areas within the valley.

Pointing out to continued peaceful strikes, demonstrations and dharnas by different educated groups of youth–ITI degree & diploma holders, Home guards, agriculture technocrats etc.- Manhas asked where is the concern of authorities to address to their genuine demands. He said that despite great tourism potential in Jammu Division, the government has not taken enough measures to exploit it for bringing more and more tourists from within and outside the country. Laying more thrust on expanding tourism industry in Jammu Division would automatically increase job opportunities for the youth, he said adding similarly the government needs to expand Agriculture and Horticulture sectors to promote employment avenues.