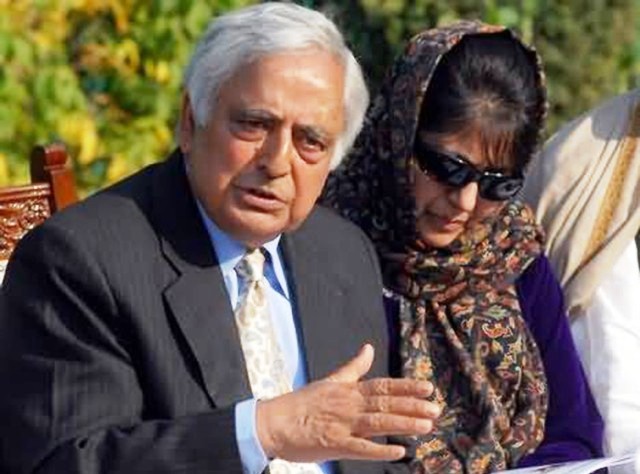 Srinagar, October 27, (Scoop News)- Peoples Democratic Party (PDP) patron, Mufti Mohammad Sayeed Monday said the upcoming assembly elections offer a historic opportunity to the people of Jammu and Kashmir to assert their identity, political rights and constitutional distinction.
Addressing a party workers convention of Sonwar assembly constituency, he said the PDP provides a platform for reconciliation, resolution and reconstruction and if voted to power it would carry forward the mission for peace and dignity that it had undertaken in 2002.
“Upcoming elections are crucial in many senses and the people could utilize this opportunity to assert their democratic rights to give a positive turn to the situation which has witnessed deterioration during last six years,” the PDP patron said.
Mufti said the grey areas in the political scene of the state have disappeared and the people are now fully aware about the performance of every party seeking their votes. “I hope the vote this time is used with wisdom and discretion so as to elect a party with a clear majority which can address the challenges facing the state,” he said.
Mufti said the implications of the upcoming elections are beyond government formation and the results would be crucial to safeguarding interests of the state, resolution of Kashmir problem and securing the rights of J&K within the Union.
Cautioning the people against fragmentation of votes, Mufti said it is important to convey a message of unity and political maturity in order to grapple with the challenges and problems facing the state. He said the fragmentation of votes had in the last elections resulted in the formation of a government which neither had any political agenda nor a commitment towards the people of the state. “Mere numerical strength in assembly by making alliances without a political objective or development goals cost the state dearly during the last six years.We need to come out of the fixation that coalitions are inevitable,” he added.
Mufti said if at the national level and in major states like UP, West Bengal and Tamil Nadu people can give a decisive mandate to a single party for effective governance there is no reason why Jammu and Kashmir can’t do similarly as we have a history of giving massive mandates in the past to one single party. “This time PDP eminently qualifies for people’s trust and vote,” Mufti said.
The PDP patron said his party has during the last decade or so grown as a platform for connecting various regions of the state and has tried to pull the state politics out of the traditional mode which often ended up in lack of cohesion between different regions and communities. PDP, he said is now a party with a strong cadre and political base throughout the state and can genuinely claim to address the issues facing all regions and sub regions.
Mufti said the party is the only antidote to the communal polarization that unfortunately marked the last general elections in the state. “When we talk of resolving Kashmir we mean establishing friendly relations between our country and Pakistan and making Jammu and Kashmir a bridge between the two countries rather than a bone of contention which the two armies have been fighting each other for the last seven decades causing immense misery to people of all regions of the state,” he said.
Mufti said the next six years are crucial for not only ensuring good governance but accomplishing the challenging task of rebuilding safe, sustainable and planned infrastructure in Jammu and Kashmir especially in the aftermath of the devastating floods that hit the state last month.
He said the disaster caused by the flood could be turned into an opportunity by a government with full mandate and sincere agenda to rebuild the state and its economy in a way that it could in reality enjoy the amenities and avenues of growth available to 21st century societies.
Senior leader and MP Tariq Hameed Karra while addressing the convention said the state was ready for a change but the disastrous performance of the state govt in managing the September floods and its aftermath has added urgency to the need for such change. He said contrary to the impression created by the NC the voter turnout this time would be much higher as the people would come out in larger numbers to vote this government out and punish it for its six year long misdeeds.
The Party Chief Spokesperson, Naeem Akhtar; Mohammad Ashraf Mir, district president, Srinagar and MLC, who is also the party’s candidate for Sonwar constituency; Zaffar Iqbal Manhas, Chief Election Coordinator and State Secretary, also addressed the meeting. District vice president, Mohammad Maqbool Beig; Zonal president, Mohammad Shafi Mir and Mohammad Latif Mir also spoke on the occasion.

Filed under: News, Politics
Share Tweet Pin G Plus Email
previous article: Ahead of Launch, Reliance Jio Plans on Merging with 2 of its Subsidiaries
next article: Cardinal Trading Says Greece Back In Focus As Yields Surge