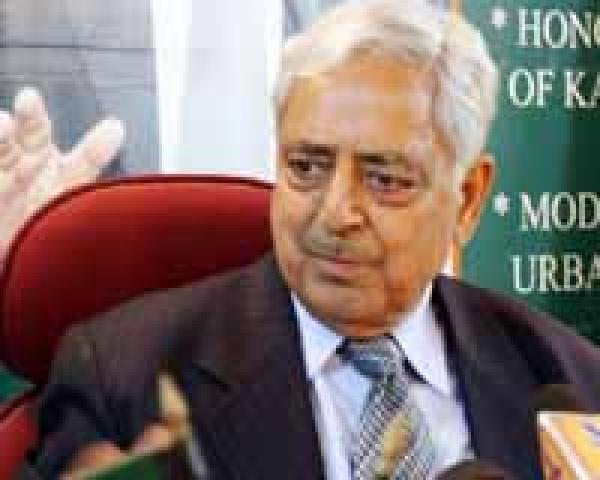 , May 29  – Mufti Mohammad Sayeed, Patron of  Peoples Democratic Party (PDP) has expressed hope that the new government at the centre will address resolution of issue on priority. Speaking at a PDP workers convention of Hazratbal constituency here today he said there was no reason now to dither on this most serious problem that had been a source of discord, disruption and destruction for more than six decades.

The PDP Patron said the new government at the Center should resume the dialogue process with as also address the internal dimension of the problem to achieve sustainable peace in the subcontinent. “That alone would pave way for solution of other problems which had gripped J&K for many generations”, he said and added that while the bilateral dimensions of the problem need to be resolved through a sustained dialogue process with Pakistan, on the internal front, the Government of India must work towards implementing the recommendations of the Prime Minister’s Working Groups to expand the peace and reconciliation process.

Referring to the just concluded Lok Sabha elections, PDP patron thanked those people who had voted the party in all parts of the State in respectable numbers. He said it was a matter of special satisfaction for him that the party had expanded its base to newer areas in the State. This he said augured well for the party’s future and its people-friendly agenda.

Mufti said PDP had played a significant role in changing the mainstream and separatist discourse on problem. It was as a result of the lead given by his party and government since the watershed elections of 2002 that it was no more mandatory for a state chief minister to be a mouthpiece of hawks on . Similarly, he said the isolationist tendencies of most of the separatist leadership were yielding space to pragmatism.

Pointing to the emergence of an atmosphere of realism about , Mufti said PDP through its efforts and the Self-Rule agenda had been able to create a middle ground for all forces of peace progress and reconciliation to operate. These forces, he said, need to be strengthened and given credible instruments to deliver on peace and progress fronts.

Mufti said , and the people of had invested substantially in peace process since 2003. The progress achieved through various confidence building measures should now be utilized for a final solution by taking all the stake-holders into confidence.

The PDP Patron reiterated the resolve of his party to stand by the people of the State and work for the agenda set by it. He said the party will continue to pursue the issues of reduction of troops on internal security duty, scrapping of the AFSPA and unfair exploitation of the State’s water resources. Side by side with these issues the party would work for strengthening the tans-LoC relations to remove the sense of siege and separation among the people of the erstwhile State.

Mufti said to begin with the new government should start implementing the recommendations of the Working Groups appointed by the Prime Minister Dr Manmohan Singh during his previous tenure. That alone, he said, could inspire confidence among the people here and set stage for development and employment. He said economic measures like transfer of power projects as recommended by Rangarajan group could go a long way in improving state economy and creation of employment opportunities.